Boeing has sustained a decade-long program to develop aircraft that reduce the use of fossil fuels or eliminate it altogether.  SUGAR (Subsonic Ultra Green Aircraft Research) program designers have resorted to configurations that were a part of early high-performance sailplanes, those craft that soar on the energy of the very air around them.

Sailplane designers know that longer wings give a lower span loading: the weight of the airplane and its payload is spread over a greater span.  On powered craft, low span loadings give greater rate of climb for the same power and enable throttling back to get the same cruise speeds.  Longer spans usually lead to heavier structures, though.  Spars end up weighing more and wings are subject to twisting in the wind.

To get around these problems, early designers used highly-tapered wings to move the bending moment on the wings inward, and strut bracing to reduce the cantilevered segment of the wing.  Hawley Bowlus used these methods to make a 61-foot, nine-inch wingspan Senior Albatross sailplane weigh a mere 153 kilograms (340 pounds.  It could carry a 180 pound pilot for a gross weight of 520 pounds.  The wing area of 204.75 square feet gave an aspect ratio of 18.72 (area divided by span).  Considering its mostly wood and ply construction, it was strong enough for cross-country soaring. 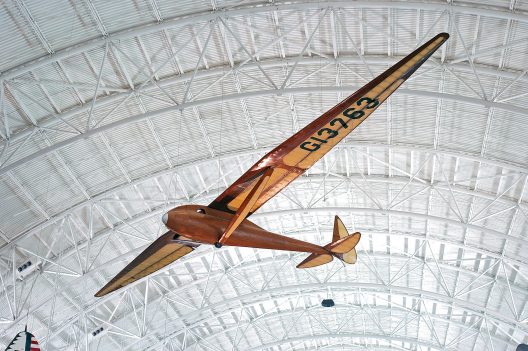 Built of extremely light wooden construction, the Bowlus Senior Albatross is similar in configuration to the new Boeing design.  This example is in the Smithsonian Air and Space Museum.  The lead image for this entry is in the National Soaring Museum in Elmira, New York.

The TTBW configuration has a high-aspect-ratio wing to minimize induced drag in the cruise. The long, thin wing is braced by trusses—similar to the Hurel-Dubois designs — that minimize the weight penalty of the longer span.

Boeing’s Transonic Truss-Braced Wing (TTBW) concept results in a 170-foot span, low-drag wing designed to fly at Mach 0.8, similar to current jetliners, but on less power.  This is crucial for hybrid electric power systems and for low fuel burn.  Originally developed in 2010 under the Boeing and NASA Subsonic Ultra Green Aircraft Research (SUGAR) program to study new configurations for ultra-efficient airliners, the concept has evolved to higher aspect ratio wings and higher speeds.

Shown at the January 8 American Institute of Aeronautics and Astronautics SciTech conference in San Diego. the revised TTBW is claimed to have an eight-percent fuel-burn advantage over a conventional configuration with cantilevered wing.

Graham Warwick, writing in Aviation Week, notes, “The latest version of the company’s Transonic Truss-Braced Wing (TTBW) can fly higher and faster than previous iterations thanks to its optimized support truss and adjusted wing-sweep angle.

Boeing’s program manager for transonic truss-based wings, Neal Harrison, says, the “new design is updated to be more consistent with current air travel,” and can be applied to aircraft of any size.  Tweaking the truss and wing sweep enables fuels savings of eight to ten percent compared to conventional cantilevered wings.  Harrison explains that a lightweight `170-foot span folding wing sits atop the airplane’s fuselage, supported by a truss composed of two major struts and two smaller “jury struts.”

Harrison adds, “We are essentially taking the wing aspect ratio and doubling it.  The aspect ratio allows us to reduce the induced drag – the drag due to the creation of lift. We get better performance out of the vehicle.”  Current narrow-body airliners have aspect ratios of about 8 to 10.  A Boeing 737 has a span of 118 feet.  Narrowing the wing chord and increasing the span gives the new truss-braced wing an aspect ratio of about 16-18.  Outer wing panels will fold upward to enable the TTBW to use the same airport gates as a 737.

“Flutter is a primary design consideration for higher-aspect ratio designs.” 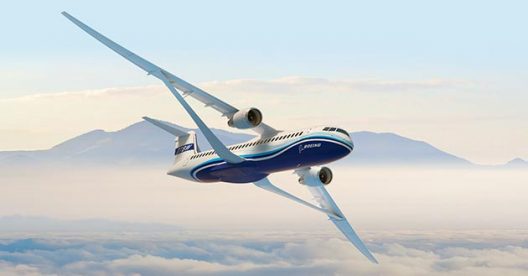 “Artist’s concepts of the refined TTBW design released by Boeing show the increased sweep of the high-set wing and the revised design of the truss. The main member has increased chord at the fuselage, forward sweep and tapers toward the junction with the wing.” (Aviation Week)

Even though the aircraft pictured appears to be conventionally powered, Aviation Week reports, “…NASA is studying versions of the TTBW concept with hybrid-electric propulsion. These have electric motors integrated into the turbine engines. An electric-powered ducted thruster on the tail ingests the fuselage boundary layer and re-energizes the wake, reducing drag and energy consumption.”

NASA’s and Boeing’s studies on this configuration can be found here for the basic wing configuration, here for electrifying the concept, and here for an analysis of the aeroelasticity of the wing.