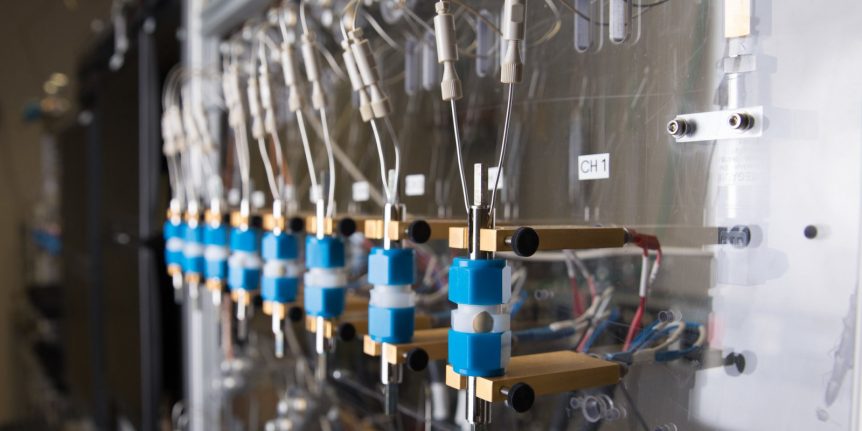 Dr. Jangwoo Kim has a resume’ that puts a great many qualifications together that spell “battery designer.”  He has a B.S. degree in chemical engineering from Yonsei University, one of three “Sky Universities” regarded as South Korea’s most prestigious.  At Cornell University, he received M. S. and Ph.D degrees in chemical engineering, and then worked for LG Chem on lithium-ion battery pack design.  After that, he returned to Cornell to work on his Ph.D, investigating “next-generation rechargeable battery technology, including Li-Air and Li-Sulfur, specialized in inorganic nanomaterial synthesis and polymer processing via an electrospraying method.”  He joined IBM Research, Almaden Research Center in 2016 and participated in the Battery 500 project, aiming to build a battery pack with a specific energy of 500 watt-hours per kilogram.   We see the project leader, Dr. Winfred Wilcke, in a short video about that project.

Battery 500 intended to reduce or eliminate heavy metals such as cobalt from the cells.  Cobalt is not rare, but it is expensive, priced at $33,000 per metric ton (compare to aluminum at $1,725 per metric ton) and found in areas where conflict and exploitation prevail.  Incidentally, cobalt-related illnesses are found in its incorporation in alloys used in hip-replacement prostheses and even through excess beer consumption (cobalt being used to reduce foam).

Adding to IBM’s research, as noted in his SAS 2019 introduction, new battery technology Jangwoo has helped invent “can potentially be a breakthrough for electric aircraft or other high power applications.” 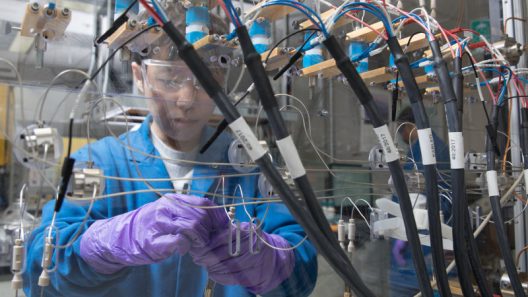 IBM Almaden Battery Lab – Battery tester and cycler.   The battery uses three new, proprietary materials, including a cobalt- and nickel-free cathode material and a liquid electrolyte. The unique combination is able to suppress lithium metal dendrites during charging, which lowers the chances that the battery will catch fire

As a Research Staff Member / Principal Investigator, Dr. Kim is leading a team to accelerate the commercialization of the technology in collaboration with external and global partners. His research activities are currently focused in electrochemistry and advanced materials for energy storage and AI hardware devices.

In a press release written by Young-hye Na, Manager for Materials Innovations for Next-Gen Batteries, IBM Research, IBM announced the results of the matters Jangwoo spoke of at SAS 2019.  The new batteries are reputed to outperform existing lithium-ion batteries “in multiple measures.  Depending on the application, this family of batteries can be modified to deliver on critical performance factors.”

The main task seems to be to remove cobalt and other heavy metals because of adverse effects on human health and the environment in general.  In response, IBM says, “Using three new and different proprietary materials, which have never before been recorded as being combined in a battery, our team at IBM Research has discovered a chemistry for a new battery which does not use heavy metals or other substances with sourcing concerns.”

IBM adds, “The materials for this battery are able to be extracted from seawater, laying the groundwork for less invasive sourcing techniques than current material mining methods.”  Potentially less energy intense, too, not requiring the large machines necessary in heavy-duty mining and possibly less energy intense in extracting the needed materials from ores and other mineral components.

Starting at 1:30 in this video, the dangers of cobalt and IBM’s response to these are combined.  Watch the rest of the video for EV-related items.

IBM promotes the battery in costing less, charging faster, and having higher power and energy densities.  They claim greater “greater energy efficiency” and “low flammability.  Without divulging much about the “new and different proprietary materials” involved.  IBM does disclose a cobalt and nickel-free cathode material and a “safe liquid electrolyte with a high flash point, probably preventing negative results from overheating.  The electrolyte also prevents dendrite growth, a cause for rapid battery depletion and even short-circuiting.

With safety well established, how does the new battery perform?

Because of the elimination of heavy metals, the battery is lower cost than equivalent Li-ion cells.

It charges faster, with, “Less than five minutes required to reach an 80 percent state of charge (SOC), without compromising specific discharge capacity.”

It has a power density of more than 10,000 Watts per liter, containing high power in a small area – great for aircraft.

Just as important, its high energy density, 800 Watt-hours per liter, is comparable to state-of-the-art Li-ion batteries.

It has excellent energy efficiency (sometimes referred to as Coulombic efficiency) returning 90 percent of the energy used to charge the battery.

Working at Almaden may enhance this effort, the site a major Artificial Intelligence (AI) research center.  Researchers use a “technique called semantic enrichment to further improve battery performance by identifying safer and higher performance materials. Using machine learning techniques to give human researchers access to insights from millions of data points to inform their hypothesis and next steps, researchers can speed up the pace of innovation in this important field of study,” according to the press release.

Tesla’s recent 21270 (21 mm diameter x 70 mm length) cells have the following specifications.  Without knowing the IBM’s battery weight per liter, true comparisons will be difficult.  Other factors will affect the total weight of the battery pack.  Since the IBM battery is reputedly less likely to ignite, it might need less weighty enclosures, for instance. Additionally, Tesla has made a point of removing cobalt from its batteries.

The Tesla batteries have an edge in power density (Power density = power/volume = W/liter), but other factors such as being heavy-metal free and flame resistant may be of over-riding concern for designers.  Besides, this is the first round for IBM’s cells, and further development may help IBM reach higher numbers.  As it is, IBM’s new batteries are significant improvements over existing lithium batteries.