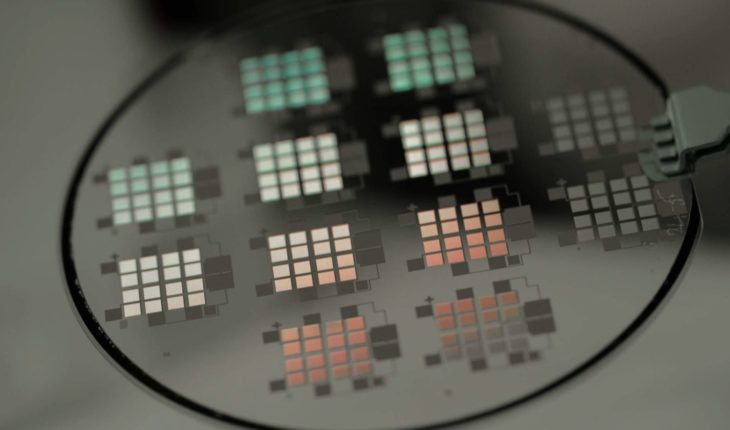 Laurence H. (Larry) Cooke, Chief Technology Officer for NovaSolix, a California-based solar panel manufacturer, discussed a way to make what are essentially radio waves into efficient, inexpensive solar power.  His biography includes this indicator of a productive life. “Larry “Cooke has written one book, multiple papers and have over 100 granted US patents. Cooke is currently CTO and Chairman of NovaSolix, a revolutionary Carbon Nanotube Rectenna array based solar cell start-up.”

Thoughtco.com says, “Any device that directly converts the energy in light into electrical energy through the process of photovoltaics is a solar cell.”  Such devices have a longer history than your editor anticipated.  Antoine-Cesar Becquerel noted a voltage drop when light fell on a solid electrode in an electrolyte solution.  It took until 1839 for Charles Fritt to develop the first genuine solar cell, by coating semiconducting selenium with an extremely thin layer of gold.

In 1941, Russel Ohl created the silicon solar cell, the predecessor of today’s rooftop panels.  His cell achieved less than one percent efficiency, though.  According to Thoughtco.com, “In 1954, three American researchers, Gerald Pearson, Calvin Fuller, and Daryl Chapin, designed a silicon solar cell capable of a six percent energy conversion efficiency with direct sunlight.”  Bell Laboratories followed with early mass production of such cells, installing a Bell Solar Battery in a telephone carrier system on October 4, 1955. 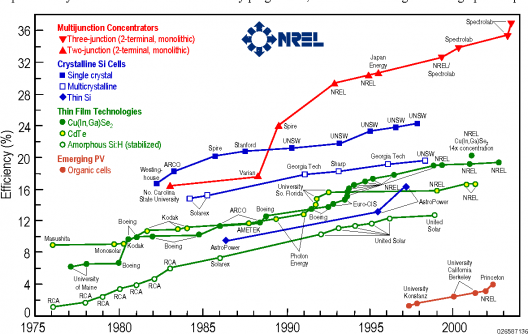 Most panels on rooftops today are still only about 15 to 20-percent efficient and even those on Solar Impulse were rated at around 22.7-percent.

Novasolix explains this lack of efficiency.  “Today’s common solar technology is based upon the photovoltaic effect that was first shown in 1839. Photovoltaic solar cells operate at the quantum level. A photon approaches an electron. If the photon has the required minimum energy, it can be absorbed by the electron that excites the electron (moving it to a higher energy state). Capturing the resulting diffused electrons creates an electric current.

“The key with PV technology is that not just any photon can excite an electron. The photon needs a minimum amount of energy . That means that lower energy infrared light (about 40% of all solar energy to hit the surface of the Earth) will not generate electricity. Furthermore, only certain frequencies of light (specific colors) correspond to the energy states required to knock an electron free. And, of course, a weak light cannot excite an electron to the next higher energy state, so dim lights produce zero power in PV cells.”

Larry’s description of NovaSolix’s technology shows a very different approach.  “We are developing rectifying antenna based solar devices used to capture solar energy with an initial target of twice the efficiency at 20% of the cost and 20% of the weight per watt of current single junction solar cells. We are using multi-wall carbon nanotubes (CNTs) grown in arrays of tiny antennas that are suspended between Aluminum ground/contact lines.”

All solar energy up to this point requires that photons push electrons to a higher energy state.  Novalsolix uses microscopic antennas to capture the light energy “as very high frequency alternating current and then use a diode to convert the alternating current into usable direct current.  Each carbon nanotube antenna is about one micron (1/10,000,000th of a meter) long with a diode on one end that operates at frequencies approaching 1 PHz or one quadrillion cycles per second.  Compare that to  AM radio, which operates at around one million cycles per second.  AM antennas are about a meter long.

Because NovaSolix collectors place “roughly one million tiny radio receivers per square inch, they are able to retrieve frequencies “from low infrared through visible light and up into the ultraviolet.”  Gathering the full spectrum enables conversion of weak light to small amounts of power.  A currently real 40-percent efficiency with a theoretical limit of 90 percent enables smaller, lighter panels to generate 400 Watts per square meter to 900 Watts per square meter. 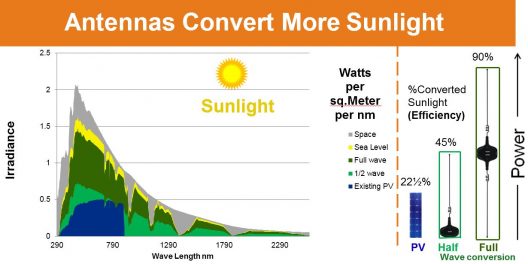 The blue represents modern solar modules conversion ranges, the light green represents a working prototype by NovaSolix, and the dark green (plus areas under) is the goal. Yellow and grey represent potential at sea level and in space. Source: PV magazine

Revised manufacturing techniques using existing tooling will produce cells at very low cost and which weigh less while bringing flexibility that will allow their use on curved aircraft surfaces.

The NovaSolix approach places roughly one trillion tiny radio receivers (rectennas) per square inch.  Unlike PV cells, the NS cells are compatible with a wide range of frequencies from low infrared through visible light and up into the ultraviolet. Furthermore, the NS cells are able to convert weak light to small amounts of power. The theoretical limit on efficiency of NS cells is roughly 90% or three times the energy of a PV cell. Initial NS cells will be roughly 40% efficient, producing roughly 400 watts/square meter. Finally, due to the different underlying manufacturing process, NS cells are cheaper and lighter weight than PV cells while also being flexible.

Four hours driving at 60 mph would take the car 240 miles and add 64 miles of solar charging.  One tricky calculation adds 16 miles for the hour saved by not having to stop to recharge.  Even the half-hour spent at a Tesla Supercharger would add eight miles of capacity. 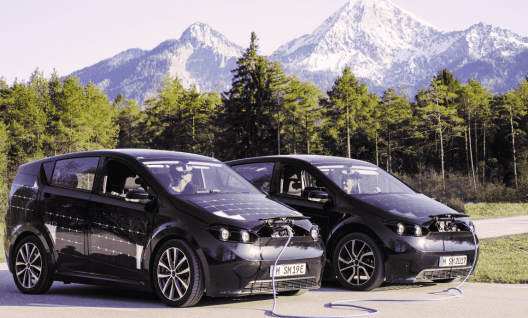 Sono Motors is a separate company that makes an electric car with built-in solar power supplemental charging. A sunny day can provide 18 miles of driving range on a 24% efficient solar cell. If NovaSolix increased solar cell efficiency to 90% then one day of sunlight driving would be 67 miles.

NovaSolix suggest, “A similar analysis shows that by covering a railroad boxcar with NS cells, the sun would be capable of powering the refrigeration system and still have power left over for propulsion.”  Even better, perhaps, a Tesla or Freighliner eCascadia with a semi-trailer covered with NS cells might be literally unstoppable in range.

NovaSolix’s initial application seems to be aimed at satellites and drone aircraft.  The company notes, “Modern communications satellites are power constrained. Even with huge banks of PV cells, few modern satellites have more than 4000 or 5000 watt power envelopes. Using NS cells, the same weight of cells could result in a tenfold increase in power budget. Furthermore, since NS cells can convert infrared radiation (normally seen as heat) into power, the satellites will have less difficulty staying cool in direct sunlight.”

The technology would be applicable to high-altitude, long-endurance craft such as those used for surveillance missions.  Again, the light weight and high power output would enable essentially endless missions.

We can wish Larry Cooke and NovaSolix the best of fortunes.  Their success be a game changer in electric aircraft.