AvWeb this morning reports on a “highly cost-effective” way to make jet biofuel from renewable materials.  According to AvWeb, San Francisco-based, “AliphaJet said its catalytic method uses materials derived from plants and animals such as triglycerides and fatty acids.  ‘Our strategy fundamentally improves the economics of making 100-percent drop-in renewable jet biofuel,’ said Jack Oswald, CEO of AliphaJet. ‘Our approach is radically different and unlocks a new industry that can meet the U.S. Navy’s goal of replacing 50 percent of its liquid fuels with renewables by 2020.’ 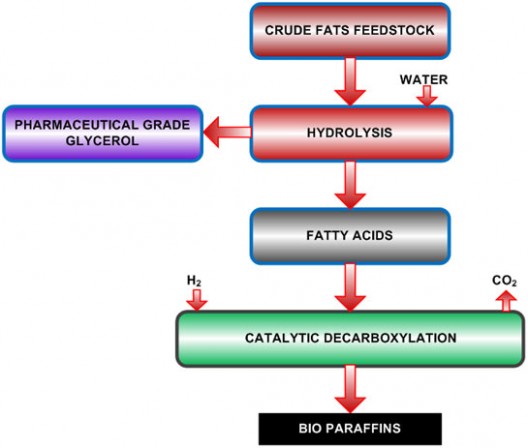 “AliphaJet said its catalytic de-oxygenation process ‘significantly reduces capital and operating costs’ because it does not require the use of hydrogen in processing. That means the processing plant can be less complex, reducing capital costs. It also saves money because the biofuel can be produced close to the site of the raw materials, without the need to be close to a hydrogen source. The company says its process can also produce renewable drop-in diesel fuel, gasoline and other hydrocarbon molecules usually derived from fossil fuel oil. A variety of raw materials can be used, including algae, certain seeds and vegetables such as camelina and soy, and animal fats. AliphaJet is a collaborative venture between SynGest and Unitel Technologies.”

Other producers are working on this once seemingly intractable problem of providing fuel without affecting food crops, as reported regularly in Green Air Online, an on-line compendium of alternative fuels and green aviation.  Green Air’s reporting shows the depth and breadth of airline industry support and industry’s response to these needs.

Flight Global, the online partner to Flight International magazine, has an Environment section that regularly reports on the developments in this area, a big part of European planning, and one that will definitely grow in America.

Further evidence that this line of research is beyond the academic is in the International Civil Aviation Organization (ICAO) Aviation and Sustainable Alternative Fuels Workshop planned for October 18 through 20 in Montreal, Canada.   It is just one of several such forums, conferences and expos dealing with the problem of fueling a thirsty industry without disrupting global food supplies.

According to the ICAO web site, “This ICAO Workshop provides a forum for the exchange of information on the state of worldwide activities on sustainable alternative fuels for aviation. Among others, discussions will revolve around the state of the global harmonization of life cycle analysis methodologies, sustainability criteria, and legal and regulatory frameworks which ensure the availability of supplies of sustainable alternative fuels for aviation.

“The Workshop, an important milestone in preparation for the upcoming United Nations Conference on Sustainable Development in June next year, will also address the role of sustainable alternative fuels as part of the measures available to States for inclusion in their action plans to reduce CO2 emissions.”

The upcoming Green Flight Challenge Expo, sponsored by Google, at NASA Ames Research Center at Moffett Field, California, will feature several biofuel and alternative energy resources, showing the way into a cleaner, brighter future – and even more interesting aerial adventures without the guilt of pollution.