It must at least seem like a good idea, because three different enterprises are taxi testing Airbuses with electric landing gear wheels meant to replace the large “tugs” that can be seen every day at airports around the world pushing jet airliners away from their boarding ramps. In current normal practice, the jets, with their engines at idle, are pushed onto a taxiway, at which point the tug disengages and the jet throttles up to begin the usually long taxi to a waiting runway. 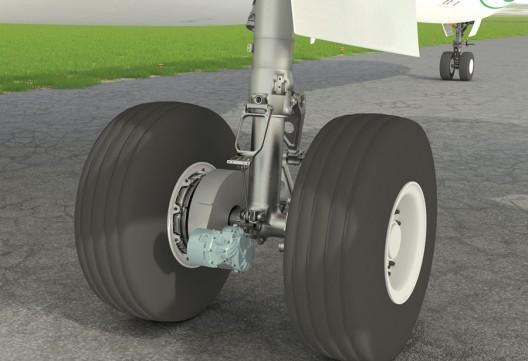 Safran and Honeywell electric main gear on Airbus A-320

Quirkily capitalized easyJet, the United Kingdom’s largest airline, is working with Honeywell and Safran to develop and test their version of this new technology, which they label the electric green taxiing system (EGTS).

EGTS-equipped aircraft can taxi without the use of their jet engines by using the Auxiliary Power Unit (APU) generator to power motors in the main wheels. Electromechanical actuators on each of the aircraft’s powered wheels and what would need to be fairly-sophisticated motor controllers provide “total control of the aircraft’s speed, direction and braking during taxi operations.” Reducing or eliminating the need for tugs would greatly improve airports’ bottom lines, too.

EGTS on its fleet may lead to further improvements in easyJet’s proudly touted environmental record. “The airline takes sustainability seriously. easyJet invests in the latest technology, operates efficiently and fills most of its seats which means that an easyJet passenger’s carbon footprint is 22% less than a passenger on a traditional airline, flying the same aircraft on the same route.

“Due to the high frequency and short sector lengths of easyJet’s operations, around 4% of total fuel consumed annually is used when the airline’s aircraft are taxiing. easyJet’s aircraft average 20 minutes of taxi time per flight – the equivalent of 3.5 million miles a year.”

With operational trials scheduled for 2013, Honeywell and Safran hope to install EGTS on new aircraft or retrofit the system to in-service airliners “as early as 2016.”  If the system works as planned and provides the estimated savings,” easyJet “will also assist in establishing the airline standard operational procedures for aircraft equipped with the system,” company sources report.

Lufthansa has tried one approach – using a powered nose wheel driven by a fuel cell developed by Germany’s space agency DLR (detailed in this blog last year) – and a second with powered main wheels created by L3 Communications, Fraport.

Lufthansa Technik installed electric motors on the main landing gear of a commercial aircraft taking over all necessary movements of an aircraft on ground. with Airbus support, the various partners teamed up “to jointly test the technology demonstrator which might lead to a new way for aircraft to taxi.”

The test Airbus A320 aircraft had the motors installed, along with an interface in the cockpit and a power supply from the APU with an integrated cooling system.

Five days of testing included “typical duty cycles” such as pushing the airplane back from its simulated jetway location, and taxiing in from and out to a runway – all of which were repeated several times. The three partners can use the “massive amount of data” collected to fine tune and develop a production version of the technology. Robert Nyenhuis, Vice President Aircraft Engineering at Lufthansa Technik says, “Our common goal is to further develop the e-taxi demonstrator. Thanks to the testing we now have the data set to make sound decisions.”