Siemens Motors announced the first public flight of their SP260D motor in an Extra 330LE aerobatic aircraft – although the motor had made its maiden, but not so public, flight on June 24.  Putting out 260 kilowatts (348.5 horsepower) in near silence according to Siemens, the motor will certainly be capable of putting the Extra through its paces.

The motor weighs only 50 kilograms (110 pounds), and with its Siemens inverter adds little weight to the nose of the Extra.  Pipistrel-designed battery packs grouped behind it push the power-pack weight toward the center of gravity, which should enhance handling qualities. 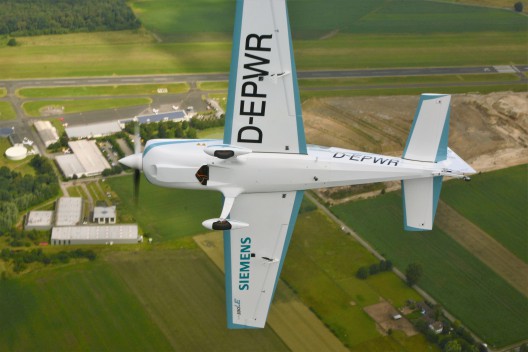 As Electronics Weekly reports, “Support structures have been on a finite element analysis diet. The aluminum ‘end shield’, for example, which supports the motor end bearing and takes all the propeller forces, went from 10.5 (23.1 pounds) to 4.9kg 10.8 pounds) .”  This presentation shows the process on page 12. 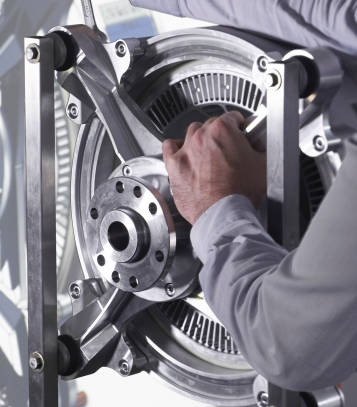 Motor bearing reduced to its best weight (for this material) by use of computer analysis.  Even lighter component is on its way

A finite element analysis program, NX Nastran, removed bits that were “barely subject to stress and therefore dispensable,” according to Siemens.  The resulting structure met safety, stiffness and stability requirements.  A subsequent iteration is said to have further reduced the part’s weight to 4.1 kilograms, and a prototype carbon-fiber end shield weighs just 2.3 kilograms (5.06 pounds).  Considering the pounding such a bearing takes in aerobatic maneuvers, this is a real breakthrough.  Parenthetically, your editor saw a propeller snap the end from a Lycoming engine’s crankshaft after the Pitts Special to which it was attached attempted a series of Lomcevaks.

At the First Annual Sustainable Aviation Symposium in May, Dr. Frank Anton showed five Siemens electric aircraft projects including the Extra 33EL.  Besides the aerobatic demonstrator, Siemens motors are powering the Czechoslovakian eFusion Magnus LSA with an 85 kilowatt (114 horsepower) unit that enables aerobatic training with the 600-kilogram (1,320-pound) aircraft.  That’s sufficient to provide low-cost, unusual-attitude recovery training to airline pilots (besides being less spectacular than performing the same maneuvers in Airbus’s or Boeings. 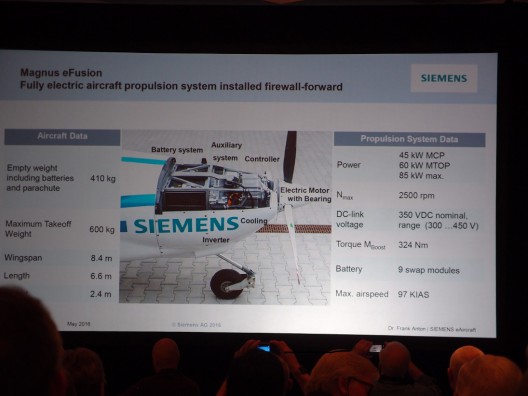 Dr. Frank’s slide on the Magnus at the 2016 Sustainable Aviation Symposium

Working with Pipistrel, Siemens helps power the Hypstair, a hybrid machine using a Rotax 914 and a dual-winding Siemens generator and dual-winding motor. This provides a high level of redundancy and near twin-engine reliability from a single propeller aircraft. 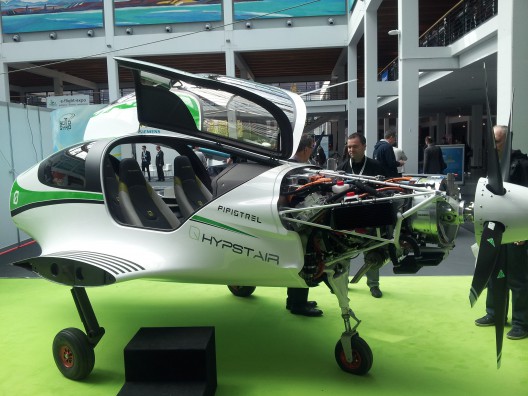 Hypstair’s unveiling at Aero 2016 in Friedrichshafen, Germany in April

The HEMEP – Hybrid Electric Multi-Engined Plane – is a Diamond DA-40 series aircraft with its engine hidden in its nose. The engine drives a generator that charges the batteries that in turn power the stalk-mounted motors. This serial hybrid provides redundancy, in that an engine failure would leave the batteries to power the motors for a limited time. 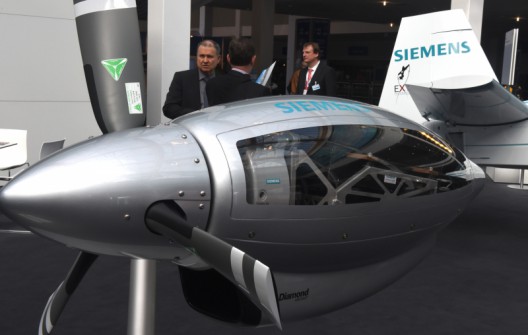 HEMEP motor pod. Siemens motors in each of two pods will be electrically powered from serial generator in nose of aircraft

Since the Symposium in May, Siemens has announced a new endeavor, Next47, an expansion into new technology that will take the company to its 200th anniversary in 2047.  Having powered the first electric aerial vehicle, the Tissandier Brothers aerostat of 1883, Siemens says it is working in five areas that will help define its future: decentralized electrification, artificial intelligence, autonomous machines, connected (e) mobility, and blockchain applications – a digital log of transactions between business partners.

Certainly the numerous electric aircraft projects currently underway will be part of the e-mobility area, and how these elements will be connected will doubtless take us in new and exciting directions.