While Boeing and AeroVironment proceed with stratospheric, hydrogen-powered giants such as the Phantom Eye and the Global Observer for extremely long-range surveillance and monitoring duties, an Albuquerque, New Mexico company is exploring the potential of a small, lower-altitude, hand-launched craft that can search – and if necessary – destroy.

A recent report from Volta Volare’s Paul Peterson attending the Association for Unmanned Vehicle Systems International conclave in Las Vegas, Nevada and an email from George Bye, Chairman and CEO of Bye Aerospace, alerted your editor to the new reconnaissance aircraft. George wrote, “While the electric Cessna program continues to advance under the leadership of Charlie Johnson and a new name, ‘Beyond Aviation’, we have continued our research into solar-electric hybrid propulsion in unmanned aircraft. At the early August 2012 AUVSI conference, my company, Bye Aerospace together with Silent Falcon UAS Technologies, unveiled a small solar-electric powered drone. The remarkable economics and technology is proven and the performance benefits have been demonstrated.” 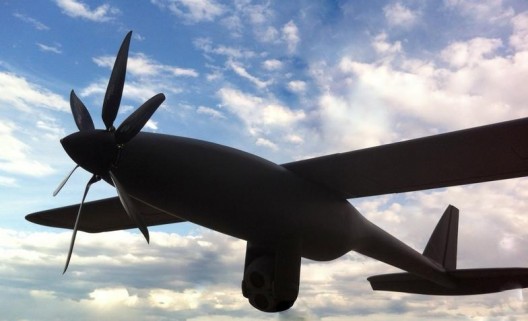 The Silent Falcon™ comes with three wings from 2.1 to 5.2 meters in span, the bigger wings slowing the craft down while giving it greater range. The short wing can keep the airplane aloft for six hours, while the longer wing reduces power needs enough to allow 14 hour missions. All within a 25 kilometer radius from the operator, based on the limits of high-frequency data transmission. Night flying is limited to four to six hours, based on wing configuration, because of the lack of solar range extension and reliance on its internal lithium batteries.

Depending on the wing chosen, the airplane flies at 20-to-112 kilometers per hour (12.4 to 70 mph). Its very low noise and heat signature allows it to fly over a target area without detection and at loitering speeds that permit extended observation. This is helpful in military or civilian applications. 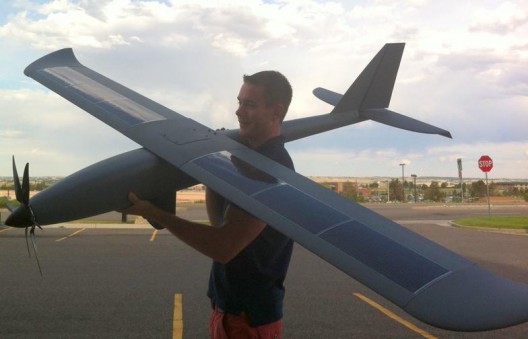 Portability of even long-wing version is demonstrated here. Airplane lands on skid after sensor pod is retracted

Thin-film photovoltaics come from Ascent Solar Technologies, also a presenter at the CAFE Foundation’s fourth annual Electric Aircraft Symposium, and a development partner in this enterprise.

Controls for the Silent Falcon come from Kutta Technologies, and use a NATO standardization agreement software, the STANAG 4586 protocol, to allow interoperability with varied fixed wing, rotary wing, and other UAVs in a given battle area. The same controls could be used to manage swarms of surveillance craft in a domestic emergency, such as forest fires or the aftermaths of hurricanes, tornadoes, or earthquakes.

An operator can monitor and control the small UAV from a back-packable handheld controller, or monitor aircraft status or sensor feedback through a wrist-mounted remote video terminal.

The visuals sent back from the Silent Falcon will be captured by FalconVision™, a dual-imaging, gyro stabilized, high-definition set of cameras that can work day or night to transmit real-time intelligence to ground controllers. Systems include short-wave infrared (SWIR), enabling black-and-white images with high resolution in extreme darkness.

The retractable FalconVision pod is a miniature version of what we see on many larger UAVs and partially on some news helicopters. 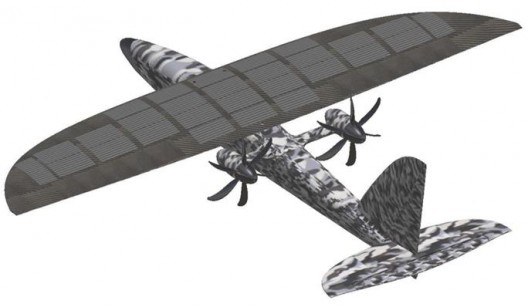 A variant of the SilentFalcon, the Snipe is a twin-motored, armed hunter, designed to act as a precise aerial platform to search out and kill individual combatants.   Larger Predator/Reaper type vehicles usually launch weapons such as Hellfire missiles, which can target a terrorist, but may annihilate many innocents in the immediate area.  Even the Snipe’s on-board weapons are suppressed for stealth during an engagement.

Beyond its military uses, the Silent Falcon can use its simple operation to observe forest fires, patrol national borders, and search for victims in disaster areas – all this at a fraction of the cost for larger systems.