Just for notebook computers now, enough of these -as in the over 6,000 such cells that propel a Tesla, could have a profound short-term effect on our hopes for electric flight. The 18650 (18 mm in diameter, 65 mm long) cells by Panasonic are the first to offer a silicon alloy anode, a commercial verification of the research Drs. Cui and Cho have been performing. 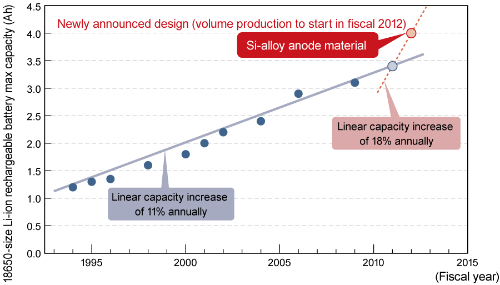 Slow, steady growth with a sharp increase for Si-alloy

Panasonic promises 4.0 Amp hours capacity, almost 30-percent more than current lithium cells of the same size. This allows a notebook battery pack almost half the size of one using graphite anode cells. The good news is balanced by the fact that the Si-based cell, at 54 grams each, weighs 10 grams more than the existing model.

According to Nikkei Electronics Asia, “The initial target application will be notebook PCs, but a source at the firm comments ‘the ultimate target is vehicles.’ For vehicular applications, weight will be a key issue…. The weight energy density is about 252Wh/kg, or about the same as existing graphite designs, indicating that the full potential of Si has yet to be attained.” 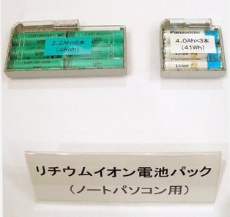 One breakthrough that allows mass production of the battery is Panasonic’s being able to overcome the “flexing” caused by volumetric increases of 400 percent in the silicon anode caused by lithium-ion movement during charge and discharge. This distortion led to short life cycles for previous attempts, but Panasonic promises 500 charge cycles with a retention of 80 percent of the cell’s capacity.

The new cells will be available in stores in 2012, according to Panasonic.