Lithium-sulfur batteries display winning qualities, such as low production cost, environmental friendliness, and high energy density.  Researchers usually give up, or look elsewhere, when the materials’ poor cycle life and loss of active materials on both anode and cathode show up.

Researchers at Beihang University in Beijing report developing “a new Li-sulfur battery using honeycomb-like sulfur copolymer uniformly distributed onto 3D graphene (3D cpS-G) networks for a cathode material and a 3D lithiated Si-G network as anode.”  They report “a high reversible capacity of 620 milli-Amp hours per gram, [and an] ultrahigh energy density of 1,147 Watt-hours per kilogram (based on the total mass of cathode and anode), good high-rate capability and excellent cycle performance over 500 cycles (0.028% capacity loss per cycle).” 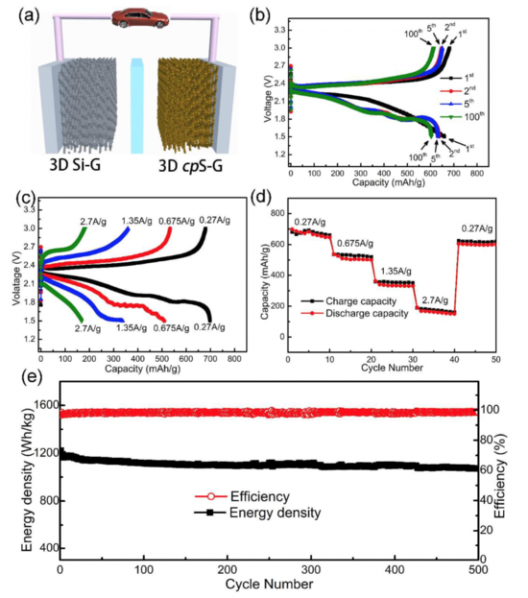 Researchers tried a series of logical steps, including embedding sulfur into activated carbons, and into carbons with pores of varying sizes – everything from macroporous, mesoporous, and smallest of all – microporous carbon structures.  This improved electric conductivity and slowed loss of active materials, but still limited the amount of sulfur and polysulfides that could be carried on the cathode materials.

Coating the cathode with sulfur copolymer “has shown good inhibition of polysulfide dissolution, but needs improved electric conductivity.”  So, all solutions bring with them an accompanying problem, even with a net gain in output.

Anodes have another set of initial issues, because the lithium metal reacts with many electrolytes and forms dendrites during charge-discharge cycles, shortening the battery’s life and causing severe safety issues.  Alloy-type anodes with similar voltage plateaus to lithium include silicon nanowire and lithiated Si/SiOx nanospheres.

Perhaps because of the many ways in which lithium and silicon can be combined with graphene and myriad other materials and electrolytes, the authors of the paper on this research conclude this way:

“Thus, a new type of silicon-sulfur battery built from silicon-based anode and sulfur-based cathode is becoming one of next-generation Li-S batteries to overcome their severe cyclability and safety problems. However, the researches of emerging silicon-sulfur battery including the configurations, design and fabrication of appropriate and mutual matching anodes and cathodes are still in the infancy.”