EV World reports that a Singapore-based company, Horizon Energy Systems, has test flown the world’s first hydrogen powered quadracopter, a small UAV that is claimed to fly for hours, instead of the minutes a lithium battery pack would provide.

The report asks that tantalizing question for all who suffer from range anxiety, especially while in flight.  “What if you could increase flying time by a factor of ten? Instead of half-an-hour, you could keep the UAV flying for five hours, and then charge it in a couple minutes time? That’s what Singapore-based Horizon Energy Systems is promising. They have developed micro fuel cells that can be fueled by three types of hydrogen storage systems from small compressed gas cylinders to ‘on-demand’ hydrogen generation chemical cartridges rated at 700 Watt-hours per kilogram (Whr/kg), significantly higher than the best lithium batteries.” 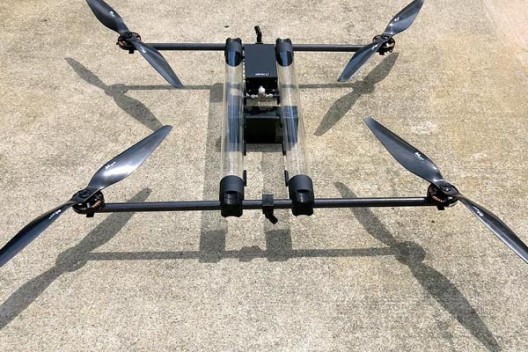 Horizon’s Hycopter micro UAV quadracopter stores 120 grams (0.26 pounds) of hydrogen in its structure, equivalent to three kilograms (6.6 pounds) of lithium batteries. According to EV World, “Since the Hycopter has less weight to lift, it can fly longer: the company claiming up to four hours of flight time.”

From their specification sheet, we see that a one kilowatt AeroStak system, complete with controller, would weight 2.25 kilograms, or 4.95 pounds.  The system also requires an external 36 Volt power supply. Stack size of the 50-cell unit is 252 x 126 x 190 millimeters (9.92 x 4.96 x 7.48 inches).  Advertised as “10 times lighter and smaller than other Horizon fuel cells,” how do Aerostaks stack up against lithium-ion batteries?

Your editor chose to make a 10 kW stack as a comparison unit for the Eck-Geiger lithium-ion battery pack used in many ultralight motorgliders, such as the Swift.  10 one-kW stacks could be arranged as a block about 10 x 15 x 7.5 inches, or possibly in a string that could be 100 x 5 x 7.5 inches, or in other configurations that would fit into an airframe.  We’ll stick with the first arrangement, since that comes close to the Flytec’s battery module size.

This would give over an hour’s flight, based on Gerard Thevenot’s flight across the English Channel in 2009.  His La Mouette hang glider used the Eck-Geiger HPD-10 motor and consumed 550 grams, or about 1.3 pounds of hydrogen per hour.  2.16 pounds of H2 would have provided 1.66 hours of flight, a comfortable margin for that 22-mile trip.

It’s hard to judge whether the Horizon systems would give a 10-fold increase in endurance over batteries – the numbers don’t seem to indicate quite that, but the system does allow clean running, even though at this point, possibly higher operating costs than lithium batteries.  Their quoted $1 per hour for 200 Watts would equal $50 per hour for the full output of a 10 kW motor.

Such stacks and their attendant hydrogen-generating systems could be used as the sole means of powering an aircraft, or possibly in conjunction with a conventional battery pack as a range extender.  Depending on unit cost and availability, Horizon Energy Systems’ packs may provide an alternative worth exploring, although one may be tempted to find a cheaper fuel source.

Boeing thinks it’s worth exploring, although in a context where expenses may not be a primary concern.  As these things become more common, costs will probably come down, and that will be a benefit to all of us.