First, let’s get the new acronym out of the way.  The solar-powered flyer recently setting records in Dubai is part of the Airbus High Altitude Pseudo-Satellite (HAPS) program.  One headline led off with “What’s the HAPS?” leaving your editor saddened by not having thought of it first.  Such craft were previously referred to as HALEs (High Altitude Long Endurance) platforms.

It’s also part of the Emirates Institution for Advanced Science and Technology (EIAST), a kind of Middle-Eastern STEM program promoting technological advancement and sustainable development in Dubai and the United Arab Emirates (UAE).

The airplane set three world records in 2010, flying over the desert Southwest in America as part of Qinetiq’s development program.  It managed 336 hours 22 minutes and 8 seconds then, but has added a record 61,696 feet altitude to its accomplishments during a 23 hour, 47 minute flight over Dubai, the highest flight so far in the UAE. 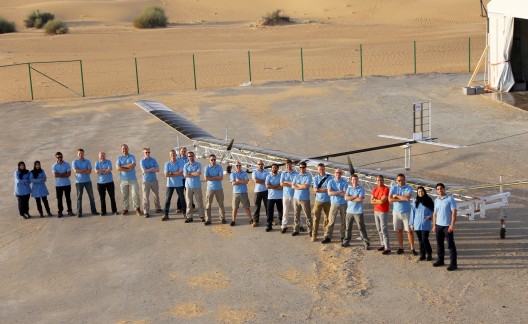 Gizmag noted the flight was the first time a HAPS flight has been authorized by a civil authority, sanctioned by the Dubai Civil Aviation Authority (DCAA).  Zephyr flew close to one of the three busiest airports in the world “without affecting civil air traffic.”

British team members were from Airbus, which acquired the Qinetiq Zephyr project in 2013, as explained in this Astrium statement: “Airbus’ subsidiary Astrium has been working on HAPS since 2008 in cooperation with the group’s defense subsidiary Cassidian and Innovation Works. For several years the program was managed as a cross-divisional nursery project, integrated a team of space and aviation specialists. In 2013 Astrium, now part of Airbus Defense and Space acquired the Zephyr assets from QinetiQ, integrating the Zephyr staff into Airbus’ HAPS organization.” 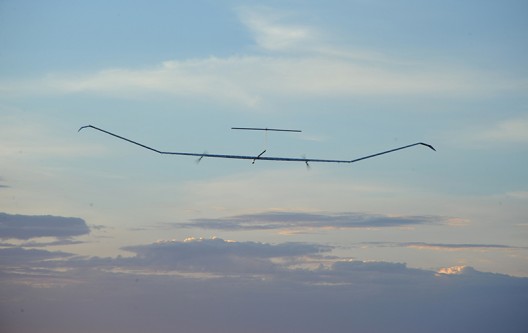 Zephyr 7 on launch to yet another extended flight

Airbus explains the multi-faceted leadership roles involved in this effort: “The flight, which was executed for the UK Ministry of Defence (UK MOD), was approved in controlled airspace, which required the close cooperation of the Military Aviation Authority (MAA), the Type Airworthiness Authority (TAA) and the Unmanned Aerial Systems (UAS) team of the MOD Defence Equipment and Support Group, leading to the Zephyr 7 being assigned its military registration, PS001 – the first Pseudo-Satellite registered.”

Chris Kelleher, Technical Director of the Airbus HAPS program reported, “The flight in Dubai demonstrated the ability of Zephyr to operate in regions of the world’s most crowded airspaces. I am immensely grateful for the support and diligence of the Dubai CAA and other authorities in working closely with the combined EIAST Airbus Team to ensure a safe and successful stratospheric flight. With all systems working well in temperatures ranging between +40° C and -80° C (104° F and -112° F) and up to a maximum altitude of 61,696 feet, this flight further reinforces confidence in Zephyr for users and regulators.”

It also marked winter-time operation of the large vehicle, with shorter days to illuminate solar cells and recharge batteries.  The fact that flight could continue through the night highlights the efficiency and capabilities of these systems. 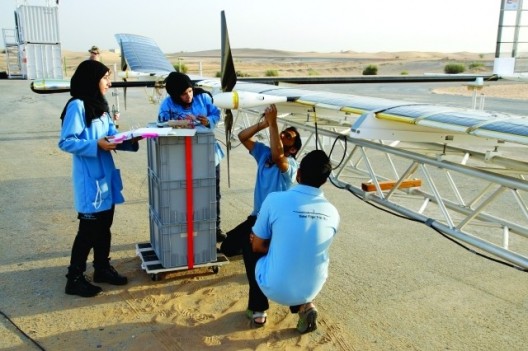 The HAPS device carried a full-HD video system with a 30X zoom lens capable of resolving objects as small as 10 centimeters (4 inches) depending on altitude.  In future, the EIAST/Airbus team will test thermal imaging, environmental monitoring, emergency services supports, the creation of temporary communications networks and the enhancement of navigation systems.

This most recent flight allowed over 250 hours of flight testing of the Zephyr 7 prototype, which will now be used to refine the final design of Zephyr 8, the next-generation HAPS vehicle currently being developed by Airbus.