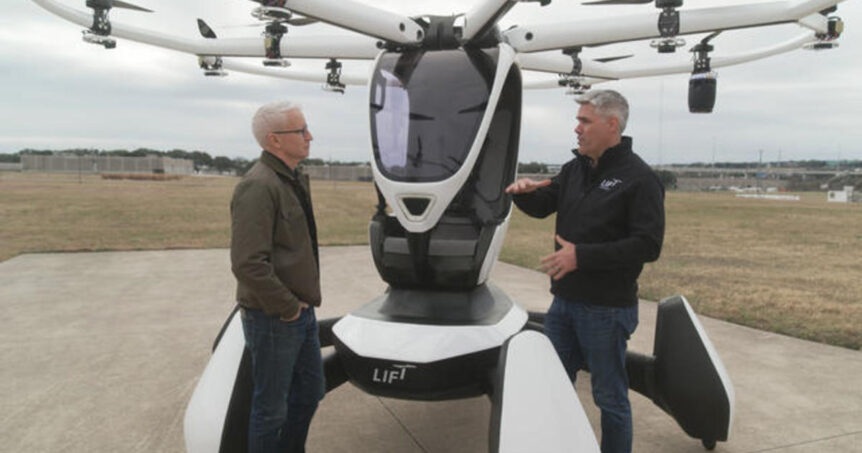 60 Minutes and The Today Show have recently featured sky taxis and future electric airliners on their broadcasts.  This is big news in that such transport is getting recognition in popular media, and even somewhat of a fair hearing.  Even though references to the Jetsons are common in such reports, both these excursions seemed to be less wide-eyed, biased, and skeptical than most.

Although LIFT’s Hexa is featured prominently in publicity for the show, Wisk’s CEO is featured in this promotional piece.  “We’re excited to share that we’ll be on this weekend’s episode of @60Minutes on @cbstv! Be sure to tune in as our CEO, Gary Gysin, sits down with @AndersonCooper to talk about the future of #mobility!”

LIFT had a say in promoting the show.  “Sitting in bumper-to-bumper traffic during rush hour is one of the worst things about the morning commute. But what if people could fly over the gridlock? Anderson Cooper takes a ride in what could be the flying vehicle of the future, Sunday.”

Filling a large part of the content time for the Sunday broadcast, interviews feature not only Matt Chasen from LIFT, but JoeBen Bevirt from Joby Aviation, acting FAA Administrator Billy Nolen, and Gysin.  A short montage includes images of all their aircraft, but also those from Airbus, Lilium, Volocopter, and eHang.

The public relations specialists at Lift must be constantly busy, since they also managed to air a promo on the Today Show six months ago.  LIFT obviously shared some of their own footage with both networks.  NBC’s reporter didn’t get a ride, citing liability concerns.  Things were more well-tested by the time CBS’s Anderson Cooper hopped aboard.

Sales are good, with an order from Cape Air for 75 Alices and additional orders from freight company DHL.

Viewers got a good look at the “massive” 8,800 pounds of battery ensconced into the sides of the fuselage, and found that it takes only 30 minutes to charge them for a two-hour flight.  The routes shown as examples of service Alice might provide would last less than an hour and provide much greater comfort than typical airline seat pitch and width.

The report included coming aircraft from Wright Electric, Heart Aerospace, and signs of interest from Airbus and Boeing.

It’s great to see major media outlets sharing the promise of electric craft.  Many people your editor talks with almost invariably ask if these are model airplanes, so 60 Minutes and The Today Show are expanding the knowledge to the general public.