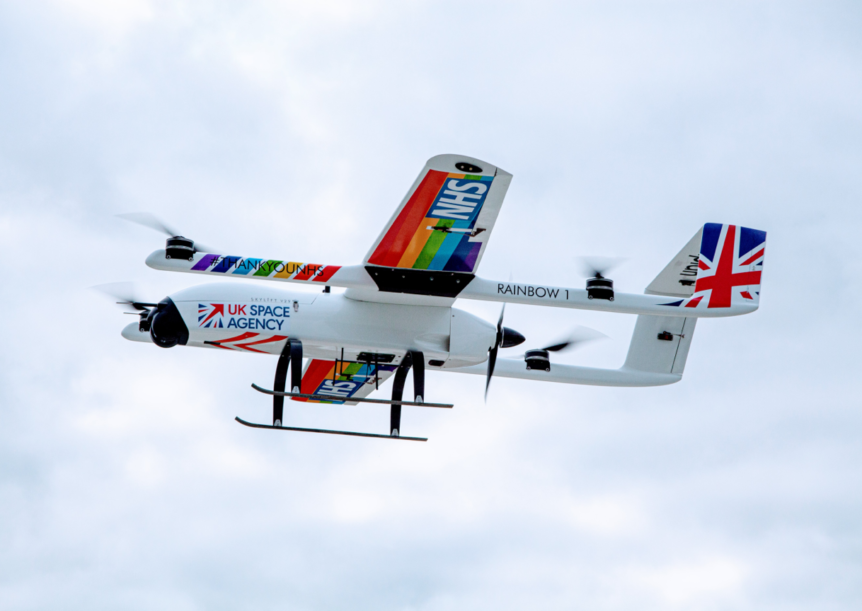 Skylift is an all-British drone system supplier being used by the National Health Service (NHS) to deliver prescription medications in the UK in partnership with Apian.  Jessica Reed, reporting in Aviation Today, explains one of Skylift’s unmanned aerial vehicles (UAVs) with vertical take-off and landing (VTOL) capabilities demonstrated its ability to fly medical supplies between Portsmouth on England’s southern coast and the Isle of Wight.

According to Distansias.com, “The straight line flying distance from Ryde [on the] Isle of Wight [is] 6.62 miles or 10.66 kilometers.”  This can take an hour or so by boat, but only minutes by drone, especially a fast one like those used by Skylift, which apparently designs and builds the machines with specific missions in mind.  Skylift has partnered with Apian, “a medical drone startup,” and delivered the first drone delivery of prescription pharmaceuticals in the UK with Boots, a drug store chain.

In the near future Skylift drones will deliver chemotherapy drugs from Portsmouth Hospitals University to St. Mary’s Hospital on the Isle of Wight.  According to Aviation Today, such deliveries will take “about 30 minutes each – a significant improvement from the four hours it typically takes to transport a package to the Isle of Wight.”

Similar deliveries will take place around England – a large island surrounded by small islands.  In Northumberland, Skylift will continue with a pilot program to test flight times and related logistics.  Only a small part of the English countryside is under test currently, with expanded services on their way for the entire landscape eventually.

Control, because of operations beyond visual line of sight (BVLOS), will rely on remote piloting and synthetic vision.  “The remote pilot interface within the Skyfleet platform ‘should be relatively familiar for anybody who’s flown anything with a glass cockpit,’ according to [Skylift CEO Toby] Moores. ‘Those without manned experience can quickly get up to speed, because it’s something that’s well understood, and we haven’t had to invent all of the UI (user interface) for that.’” 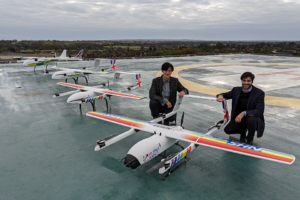 Ben Dexter, Skylift’s Operations Manager, explained Skylift’s objective with the NHS pilot program is to “make it a more reliable service for patients on an island or in remote places around the country,” Dexter told Avionics.”

Skylift will concentrate on working with British authorities to demonstrate their capabilities and work toward certification.  The company is holding off on American FAA approval and certification.  Moores explained that to operate under the Federal Aviation Administration’s regulations would be more of a challenge, depending on customers’ and whether it makes sense to expand to international operations.

Having shown its mettle in Rwanda, Zipline will enable rapid delivery of medical supplies in North Carolina and possibly Kentucky.  Starting testing two years ago at the Kannapolis “nest,” about 25 miles northeast of Charlotte.  The IEEE video of operations in Rwanda give a good overview of how these fixed-wing craft save energy by being launched from a super-capacitor powered catapult, dropping its payload by parachute, and being retrieved by a large net.  Eliminating the need for vertical lifts and landings enables Zipline to fly longer trips with potentially greater speed.  (Pan around to see the full 360-degree view of the facility.)

Operations in North Carolina will be similar to those in Rwanda and Ghana, with similar terrain over which to fly.  Rwanda is infamous for roads that are hazardous in normal circumstances and often impassable during rainy seasons.  North Carolina will not be quite as hazardous, but deliveries that would take hours by road can take minutes by air.  That’s a consideration when delivering blood or even organs.

Zipline is partnering with Walmart to deliver everything from diapers to Tylenol.  Walmart extols the virtues of such delivery in their press release.  “Between the hours of 8:00 a.m. and 8:00 p.m., customers will be able to order from tens of thousands of eligible items, such as Tylenol, diapers and hot dog buns, for delivery by air in as little as 30 minutes. For a delivery fee of $3.99, customers can order items totaling up to 10 pounds, so simply put, if it fits safely it flies.”  With the cost of gasoline these days, that could be a savings for the customers.

The service will be launched in – Arizona, Arkansas, Florida, Texas, Utah and Virginia, with Zipline parachuting goods to homes and DroneUp setting down with electric Vertical Take Off and Landing (eVTOL) capabilities for more fragile items. 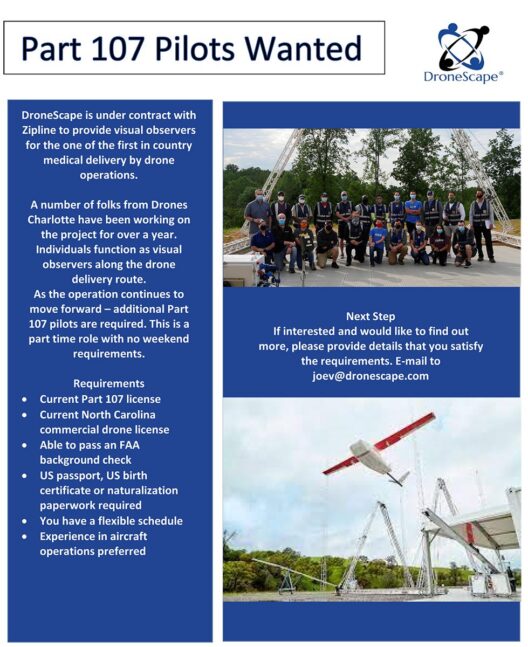 Skylift’s qualms about FAA acceptance have been addressed by Zipline. From the start of testing two years ago to the report issued by the United States Department of Transportation in February, dozens of state and federal agencies were involved.

Final Environmental Assessment and Finding of No Significant Impact/Record of Decision Zipline International Inc. Drone Package Delivery Operations Kannapolis, NC and Surrounding Area included conclusions garnered from environmental, airspace, noise control, and even aesthetic studies.  The 131-page report with the major conclusion in its title shows the many organizations and concerns to be addressed in what would otherwise seem a simple operation.

Zipline, and Skylift will eventually deliver everything from toilet paper to kidneys in their expanding networks.  We anticipate the major changes this could bring.