We’ve covered several airports that have found ways to make themselves environmentally friendly, including recycling the vast amounts of waste left by passengers, and installing solar panels to help run the site.

Recently honored by the United Nations. “Cochin International Airport Limited (CIAL) has been selected for the Champion of Earth Prize – 2018, the highest environmental honor instituted by United Nations. CIAL is honored for its successful execution of one of the revolutionary ideas of using solar energy which made Cochin Airport a first in the world fully powered by it.”

Besides generating 40 megawatts of electricity from its solar panels at 2018 levels, the airport grows organic vegetables beneath those panels.  To ensure optimum land use, “CIAL has successfully implemented organic farming of vegetables in area[s] between solar panels. The airport stands at fourth in the country in terms of international traffic and seventh in total traffic has handled ten million passengers in 2017-18.”

V.J.Kurian, Managing Director for CIAL, has an integrated concept that provides power for airport services and even feeds the 8,000 employees in diverse occupations who serve the traveling public and  grow the organic produce.  Kurian explains the overall program results in annual cost savings of Rs. 40 Crore to the airport.  As explained in Answers.com,  a crore is not an amount of money, but an Indian counting method, like counting things in scores or dozens.  1 Crore refers to 10,000,000, so 40 Crore = 400,000,000 million Indian Rupee (INR), or about $5,783,689.60 as of March 24 2019.

Kurian adds, “We showed the world that big infrastructure projects like [Cochin] Airport can be put into operation fully using alternative energy sources.”  . This will also avoid CO2 emissions by more than 9 lakh metric tons over the next 25 years, which is equivalent ot  planting 90 lakh trees or not driving 2,400 million miles “.  (Lahk is another unit in Indian counting, one lakh equal to 150,000.  90 lakh trees would be 13,500,000 trees –a  substantial number.)

Feeding the airport’s workers from the under-solar-panel gardens while having enough food left to sell to incoming passengers and generating all the power necessary to operate a large airport should give managers worldwide impetus to examine this new option.

If this were augmented with electric taxiing systems, such as those developed by Safran and L3, the airport could further use solar-generated, scalable electric supplies to offset the need for expanded grids and added fuel burdens. 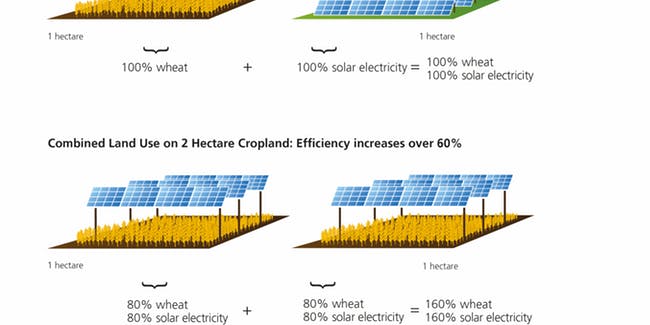 Inverse.com reports that, “It’s the latest example of how panels can work to help crops grow, a field known as “agrophotovoltaics.” Researchers from Germany’s University of Hohenheim ran an experiment in 2017 where they placed 720 solar panels in scaffolds above a series of crops. The crops tended to grow slower, with potatoes around 18 percent slower, but the yields were still profitable, the panels offset the electricity costs, and the setup increased land use efficiency by 60 percent:”

Profits should increase in the future as the cost of solar panels decrease.  For now, Cochin Airport and its leadership are showing a way to make airports a viable part of the communities they serve.