Science 2.0.com reports on an exciting potential breakthrough in solar energy and its direct transformation into hydrogen fuel.  Usually, solar cells generate current from photons, making electricity which can run things or be stored in batteries.

This new and different approach, using an innovative and inexpensive solar cell and a metal oxide photo anode, can store nearly five percent of solar energy chemically as hydrogen.

The metal oxide bismuth vanadate (BiVO4) photo anode includes a small dose of tungsten atoms, was then sprayed onto conducting glass and “coated with an inexpensive cobalt phosphate catalyst,” which helped speed up oxygen formation during water splitting.

This artificial photosynthesis, splitting water into oxygen and hydrogen, allows solar energy to be stored in the form of hydrogen, which can then be used as a fuel either directly or in the form of methane, or it can generate electricity in a fuel cell.

The report adds a ray of solar-powered hope.  “One rough estimate shows the potential inherent in this technology: At a solar performance in Germany of roughly 600 Watts per square meter, 100 square meters of this type of system is theoretically capable of storing 3 kilowatt hours of energy in the form of hydrogen in just one single hour of sunshine. This energy could then be available at night or on cloudy days.” 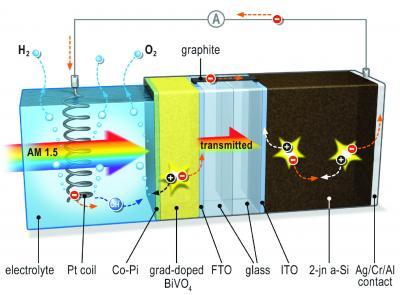 When light hits the system, an electrical potential builds up. The metal oxide layer acts as a photo anode and is the site of oxygen formation. It is connected to the solar cell by way ccontact with the electrolyte, the silicon solar cell remains safe from corrosion. A platinum spiral serves as the cathode where hydrogen is formed. Image: TU Delft

Researchers added a metal oxide layer to a “relatively simple silicon-based thin film solar cell.”  The layer acts as a photo anode for oxygen formation and helps prevent corrosion of the cell.

The researchers systematically examined and optimized processes such as light absorption, separation of charges, and splitting of water molecules. Theoretically, a solar-to-chemical efficiency of up to nine percent is possible when you use a photo anode made from bismuth vanadate, says van de Krol.

van de Krol explains, “We don’t really understand quite yet why bismuth vanadate works so much better than other metal oxides.” He found that more than 80 percent of the incident photons contribute to the current, a record efficiency for thin film metals.

The next challenge is scaling these kinds of systems to several square meters so they can yield relevant amounts of hydrogen.

This research has been published in Nature Communications  under the title, “Efficient solar water splitting by enhanced charge separation in a bismuth vanadate-silicon tandem photoelectrode.”