The Solar Impulse prototype, HB-SIA, will be making its first night flights within the next month, according to a June 15, 2010 press release from the project team. With eight successful flights to its credit, the airplane will attempt two critical missions according to the release: 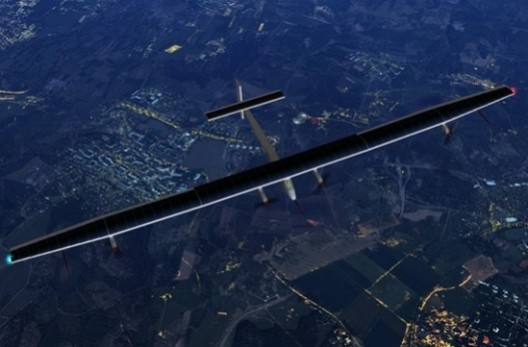 “’To fly day and night with a solar aircraft is a human and technological challenge that has never been met so far, and an essential stage of the project’, says André Borschberg, CEO and co-founder of Solar Impulse. ‘Demonstrating that we can fly a whole day and night will then permit us to fly several successive cycles and come close to perpetual flight.’

“’The big question will be whether the pilot will be able to save sufficient energy as to fly right through the night. These night flights in an aircraft propelled uniquely by solar energy are intended to demonstrate the potential of the renewable energies and the technologies that will gradually enable us to diminish our dependence on oil,’ adds Bertrand Piccard, initiator and Chairman of Solar Impulse.”

Flying a solar plane at night seems implausible, but the 400 kilograms (880 pounds) of batteries on board are charged by the over 12,000 solar cells on the aircraft’s wing, and release that energy throughout the night to keep the craft’s four 10-horsepower motors running.  Alan Cocconi, who had designed HB-SIA’s original motors (since replaced by Swiss industrial units) has noted that solar airplanes cruise at about 10 percent of takeoff power, so only four horsepower are required to maintain cruising flight.

A successful demonstration of night flight will lead to construction of a second Solar Impulse, with a series of missions including crossing the Atlantic Ocean on solar power, and flying around the world in five separate stages (to allow exchange of pilots for each three-to-four day leg of the journey).  Success on those missions may lead to construction of a tw0-seat Solar Impulse, which would attempt an around-the-world, non-stop flight by 2013.

The upcoming night flights require perfect meteorological conditions, predicted for a window between June 20 and the end of July, with the most likely flights to take place between June 20 and 30.  The Solar Impulse team will announce potential flights 72 hours in advance, and confirm flights 24 hours before takeoff.  To keep up with the announcements, go to www.solarimpulse.com.