Reassembled and ready, Solar Impulse 2 stands ready to leave Abu Dhabi on an historic around-the-world flight within the next month, according to the project’s latest announcements.

When HB-SIB leaves Abu Dhabi, it will cross two oceans and four continents before returning to its departure point.  The trip will include landings in 12 locations and a total distance of 35,000 kilometers (21,700 miles) – all without using a drop of fuel. Its route and schedule will be affected by weather, and since the airplane will fly at only 27 miles per hour at night to conserve battery energy, by prevailing winds.  Normal flight speeds will range from 50 to 100 kilometers per hour (31 to 62 mph).

The press release lists the landing sites: “Si2 will take-off from Abu Dhabi, capital of the United Arab Emirates, in late February or early March and return by late July or early August 2015. The route includes stops in Muscat, Oman; Ahmedabad and Varanasi, India; Mandalay, Myanmar; and Chongqing and Nanjing, China. After crossing the Pacific Ocean via Hawaii, Si2 will fly across the Continental U.S.A. stopping in three locations – Phoenix, and New York City at JFK. A location in the Midwest will be decided dependent on weather conditions. After crossing the Atlantic, the final legs include a stop-over in Southern Europe or North Africa before arriving back in Abu Dhabi.”

Bertrand Piccard, initiator and chairman of the Solar Impulse, expresses the project’s hopes for the mission. “With our attempt to complete the first solar powered round-the-world flight, we want to demonstrate that clean technology and renewable energy can achieve the impossible. We want youth, leaders, organizations and policymakers to understand that what Solar Impulse can achieve in the air, everyone can accomplish here on the ground in their everyday lives. Renewable energy can become an integral part of our lives, and together, we can help save our planet’s natural resources.” 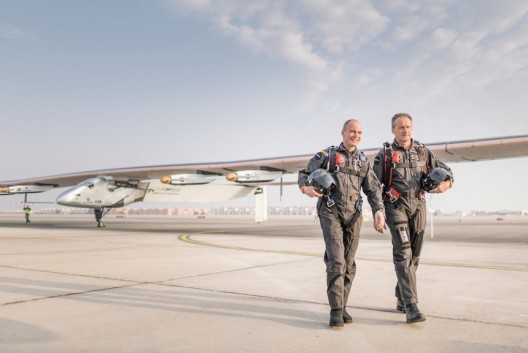 On a probably hot tarmac, Bertrand Piccard and Andre’ Borschberg stand before SI2, an airplane in whch they will spend 25 days, much of those over water.  Photo courtesy Solar Impulse| Ackermann | Reva

H.E Dr. Sultan Al Jaber, UAE minister of state and chairman of Masdar, highlights the links between airborne and terrestrial solar power.  “Masdar and the emirate of Abu Dhabi are proud to host the departure, and  hopefully safe arrival, of Solar Impulse and its pilots, as they dare to fly round the world using only the power of the sun.  Solar Impulse is a demonstration to prove the impossible can be possible, and that innovation knows no boundaries. As a leader delivering sophisticated renewable energy projects around the world, Masdar is a natural partner for such an innovative endeavour, which underscores the viability of solar technology.”

Acknowledging earlier solar flight efforts, such as those by Fred To, Larry Mauro and Eric Raymond, Andre’ Borschberg, Solar Impulse co-founder and CEO, explains the heavy emphasis on pilot training and conditioning leading to the big flight.  “Solar Impulse is not the first solar airplane, however it is the first able to cross oceans and continents – remaining in the air for several days and nights in a row without landing.  But now we have to ensure the sustainability of the pilot in order to complete the route; Solar Impulse 2 must accomplish what no other plane in the history of aviation has achieved – flying without fuel for 5 consecutive days and nights with only one pilot in the unpressurized cockpit.”

Solar Impulse 2 and its crew of 80 technicians, engineers and a communications team will not only prepare the big craft for its epic voyage, but meet with students, engineers, and government officials to help them understand the significance of the technology and the adventure.

Bertrand Piccard explained the importance of using the sun-drenched locale as a start and end point for the flight. “Masdar and Abu Dhabi are setting an example for the entire world, promoting the use of diverse, sustainable and clean energy sources by deploying some of the globe’s most sophisticated renewable energy projects. Most importantly, Masdar shares our unwavering commitment to ensuring a cleaner future for our planet.”

We will be able to follow the minute-by-minute progress of the trip, and “During stopovers, the Solar Impulse team will organize meetings, airplane visits and Google Hangouts On Air in order to promote the mission’s message and highlight innovative technical solutions to climate change.”  In these efforts, Solar Impulse may help to sway those not yet involved with a clean energy future.  Certainly, the silent wings passing overhead have the power to awe observers, and will trace a line of millions of new believers along its course.