Even while the first Solar Impulse was scaling the Alps, traversing the Moroccan desert, and crossing America, skilled craftsmen and women were designing and building Solar Impulse 2, a larger, heavier solar-powered airplane rolled out this week.  Its next challenge, that of flying around the world, will test the limits of even this seasoned team.

As shown on the first Solar Impulse’s flights, “Flying the Solar Impulse aircraft is quite different from being at the commands of any other airplane. Flight tactics, piloting skills, aerodynamics had to be re-learned from scratch.” 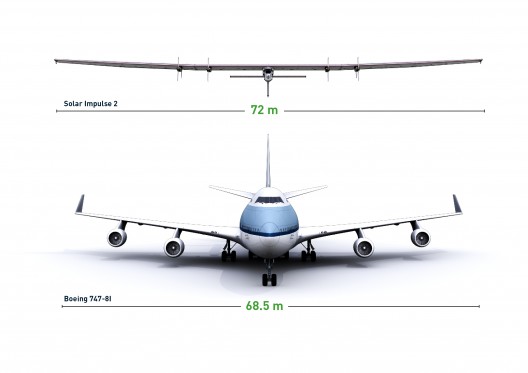 Part of the difference comes from the aircraft’s huge size and light weight.  Solar Impulse shares this:  “Here’s a fun fact for you to understand how special this aircraft is: the wingspan of Si2 is bigger than that of a Boeing 747, but the former’s weight is just slightly more than 1% of the latter (remember: the weight of a car)!”  This jumbo-jet sized craft has all the performance of an ultralight, but with such large surface areas and nowhere near the maneuverability.  Its maximum bank angle of 5°, for instance, limits its turns to very large circles in the sky.  It will take off at 26 knots (29.9 mph) in 165 yards (150 meters) and cruise at a legal U. S. ultralight speed of 49 knots (56.4 mph) at sea level.  This picks up to 77 knots (88.5 mph) at 27,000 feet, the craft’s maximum altitude. 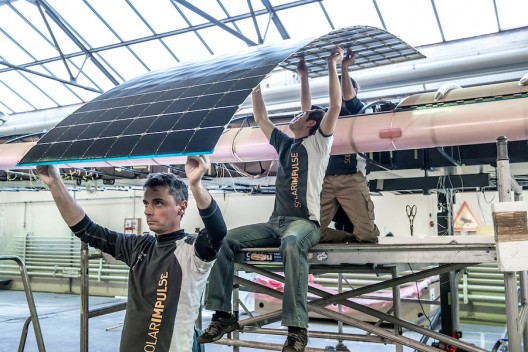 The huge airplane requires special construction techniques, relying on carbon fiber and other advanced composites for its light weight and high strength.  Its airy structure comprises a huge volume for its weight, giving rise to comparisons with feathers and thistledown. 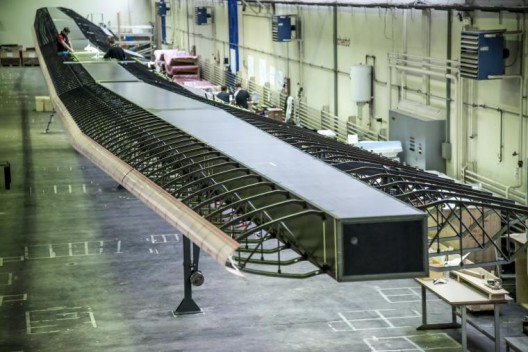 With recent tests of the craft’s cockpit accommodations and ongoing development of its thin-film solar cells and batteries (both improvements over those on Si1), the new machine should further push the limits of solar aircraft.