Waking up in the middle of the David Letterman show this morning, your editor stumbled into the computer room to check on the Solar Impulse trip to Morocco.  From the live Google Earth map shown on their web site, and the inset live video of Bertrand Piccard, all was well, and the giant solar-powered craft was sailing over surprisingly irregular terrain.  It just wasn’t the expected flat, featureless desert seen in countless films.

Solar Impulse was probably still flying over Spain at that time, having taken off at 3:22 a. m. local time (5:22 coordinated universal time or Greenwich time) from Madrid’s Barajas Airport.    At 7:30 a. m. local time (Pacific Daylight Time – 4:30 UTC), Bertrand Piccard was crossing the narrow strip of sea between the Spain and Morocco and making his way along the Moroccan coastline, chatting happily with his daughter back in Payerne, Switzerland, the airplane’s home base. 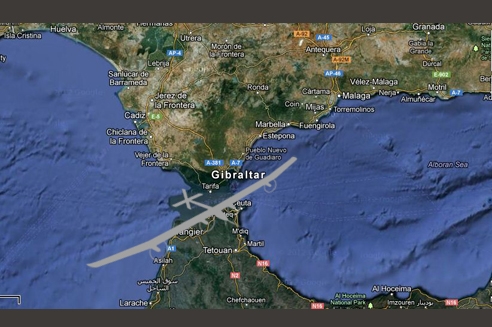 Solar Impulse attained 8,229 meters (27,000 feet) during the trip, and the project released news at that high point that Bertrand Piccard, its pilot, had been awarded the 2012 Champions of the Earth Laureate Award from the United Nations Environment Program (UNEP).  The ceremony took place on June 4th at a dinner that was a run-up to the opening of the Rio +20 Earth Conference, which will take place June 20-22 in Rio de Janeiro, Brazil.

Solar Impulse landed at 23:30 local time (UTC +1) after 19 hours and 8 minutes of flight.  It averaged 51.8 kilometers per hour, a leisurely 32.116 mph, although some of the time was taken up on diversions before reaching Rabat’s airport.

The airplane’s huge wingspan became apparent as it settled from the darkness and its wings spread beyond the runway’s landing lights.  Wingrunners, who normally ride bicycles to catch and hold the outrigger landing wheels, had to literally run after the plane once it reached the end of the landing lights because there was no room, apparently, for bikes.

To top off his long day in the cockpit of HB-SIA, a first intercontinental solar flight, and his UN award, Bertrand Piccard was guided by a voice from his past.  From the control tower in Seville, Mr. Eduardo Gilarenas, who had “guided him in 1999 through Spain on his second day of the world tour in a balloon.”  The Solar Impulse site reflects that this marked, “A wonderfully incredible coincidence, 13 years ago and a new and innovative challenge ahead: a world tour without a drop of fuel and this time in an airplane!”

A huge welcoming ceremony and ceremonial dinner were on hand for Piccard as he dropped lightly from the sky.  The Moroccan Agency for Solar Energy (MASEN) set up a large tent in an unused terminal of the Rabat-Salé airport, a tent which will also act as a hangar for the HB-SIA during its stay.

The CAFE Foundation sends its congratulations and best wishes to the triumphant Solar Impulse team.