Supporters of the Solar Impulse gathered to celebrate the giant solar-powered airplane’s landing in Brussels, Belgium today after the craft had crossed Switzerland, France, Luxembourg, and Belgium in its 630 kilometer (340 nautical mile), 12 hour, 59 minute flight. 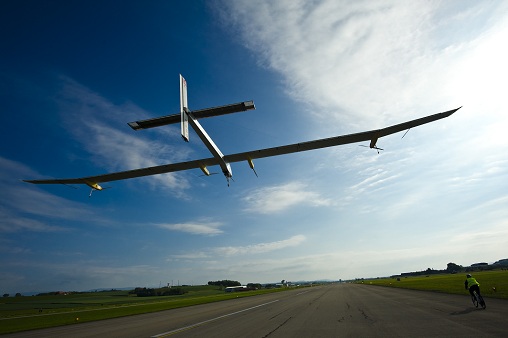 André Borschberg, CEO and co-founder of the project, flew the mission, starting 8:30 a.m. Payerne, Switzerland time and took the leisurely flight over some of the most scenic landscapes in Europe, with an average speed of 50 kilometers per hour (27 mph – one mile per hour under the stall speed of US ultralights).  He had time to enjoy the view from his average cruising altitude of 1,828 meters (6,000 feet).  Borschberg explained, “It’s a spectacular flight. The takeoff was a little challenging because we had to rush due to air traffic activity consequently I needed a little bit of time to get everything in order before I could become serene.  It was [a] little bit [of a] northeast wind during takeoff; however this was not a major problem.

“It’s unbelievably exciting to land here in Brussels, at the heart of Europe, after flying across France and Luxemburg. And to fly without fuel, noise or pollution, making practically no negative impact, is a great source of satisfaction.” 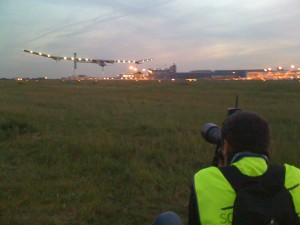 Bertrand Piccard, initiator and Chairman of Solar Impulse, said at the post-flight press conference, “…I am relieved that the weather allowed us to arrive in time for our week promoting renewable energies, planned jointly with the European Institutions to take place from 23 May to 29 2011.”

This flight is in preparation for Solar Impulse’s role in the upcoming Paris Air Show.