Solarimpulse.com reports, “The Boeing 747 landed at Moffett Airfield in San Francisco at 1:13 PM (UTC-8) on Thursday 21 February.  HB-SIA was immediately unloaded and, in the coming days reassembly will begin.”

Almost immediately, crews will assemble and test fly the already intercontinental solar-powered aircraft in preparation for a flight from the Bay Area to the East Coast.  Having conquered the gap between Europe and Africa on its trip to Rabat, Morocco and on to Quarzazate, HB-SIA braved turbulence and gusting that caused it to turn back on its initial foray into the desert.  Its final arrival at a gigantic solar energy plant in Morocco’s interior was a symbol of what clean energy can accomplish and a tribute to Solar Impulse’s pilots’ skills and the team’s imaginative creation. 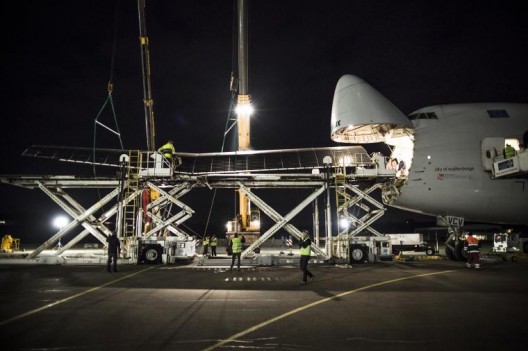 One third of the 208-foot wing slides into the Cargolux 747.  Photo: Solar Impulse|Niels Ackermann

Now, the Airbus-sized vehicle is being readied for flight testing, with possible appearances at the seventh annual Electric Aircraft Symposium and its Cross America 2013 tour. 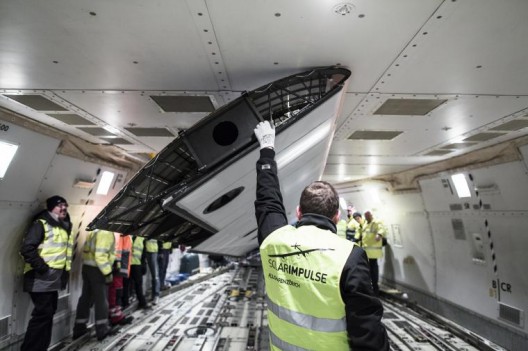 HB-SIA’s recent trip from Payerne, Switzerland to California took place on a Cargolux Boeing 747, whose cavernous hold and gaping jaws could swallow the 60.4 meter (208 foot) span wing in three parts, the tail surfaces, motors, batteries and 21.85 meters- (81 foot-) long fuselage.  The project’s technicians and engineers who have accompanied their craft to America have probably enjoyed their last carefree moment for the next few months as they begin the next grand adventure. 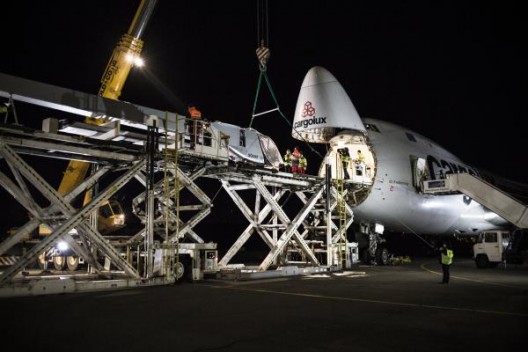