Solar Impulse 2, HB-SIB, is parked on the tarmac at Ahmedabad (Sardar Vallabhbhai Patel International Airport, AMD/VAAH), fresh from its record-making flight from Oman.  Crew members pore over its mechanical and electrical components in preparation for its next flight to Varanasi, also in the Republic of India.  In the meantime pilots Andre’ Borschberg and Bertrand Piccard share the message of their Future Is Clean organization and prepare themselves physically and spiritually for the voyage ahead.

Apropos of their stopovers in India, Borschberg and Piccard have practiced Yoga as part of the physical discipline necessary for the grueling long-distance flights to come, and Borschberg is seen in one photo using a modern version of a traditional healing practice called Shirodhara, which involves pouring a steady stream of water or other liquids appropriate for the therapy.  The term comes from the Sanskrit words shiro (head) and dhara (flow), according to Wikipedia. 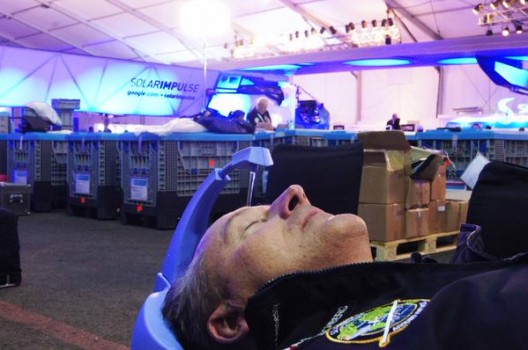 This cleansing of the body and spirit coincides with the greater mission of the flight, to cleanse the world of effects of global pollution.

According to Solar Impulse, “The platform http://www.FutureIsClean.org, was designed with the support of our web partner, Google, and aims to mobilize individuals, organizations, celebrities and politicians to confront the Conference on Climate Change of the United Nations (COP21), which will define the new Kyoto protocol in December 2015 in Paris. The goal is to establish the largest petition ever created to convince governments to implement technological solutions that are necessary. Every site visitor is asked to add their voice to the message “I want concrete solutions for a clean future” and share amongst their networks.” 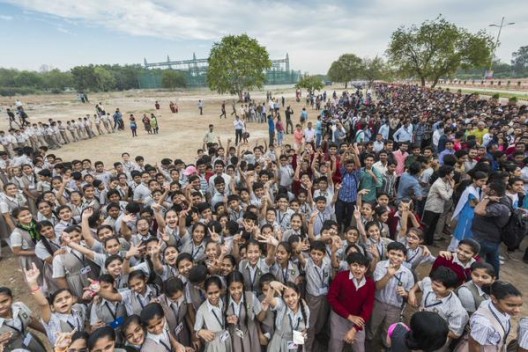 To gain support for this message and educate those who come to see the giant solar-powered craft, the team holds press conferences and meets with dignitaries, students and technological leaders in the countries they visit.  They also stage on-line Google Hangouts throughout the trip.

As they told reporters before beginning the first leg of the flight, “Only a significant support will push governments to replace old polluting technologies with clean and efficient technologies. This is what we want to create throughout our solar powered Round-The-World Flight. If there are technological solutions to fly a plane day and night without fuel, imagine the potential of these technologies in our daily lives, to achieve energy savings and reduce CO2 emissions. This would help create jobs, develop new industrial markets while also protecting the environment”.

With backing from supporters such as HRH Prince Albert of Monaco and Richard Branson, Masdar, Irena (the International Renewable Energy Agency), New 7 Wonders and Green Cross International, the Solar Impulse web site follows and documents the flight itself, while Future Is Clean discusses the environmental and political implications of the venture.

The Si2 Round-The-World flight has made its first stops in Abu Dhabi, Muscat, Oman; and Ahmedabad and Varanasi, India.  It will continue to Mandalay, Myanmar; and Chongqing and Nanjing, China. After crossing the Pacific Ocean via Hawaii, Si2 will fly across the U.S.A. stopping in Phoenix, the Midwest, and New York City at JFK. After crossing the Atlantic Ocean, the final legs include a stop-over in Southern Europe or North Africa before completing the Round-The-World flight at its final destination in Abu Dhabi.

If the excited crowds visiting the airplane in India are any indication, the flight could have a profound effect on public perception of what is possible with clean energy.