Bertrand Piccard closed out the over-year-long endurance test of man and machine, landing in Abu Dhabi, the United Arab Emirates, where the 17-leg journey began over a year ago. 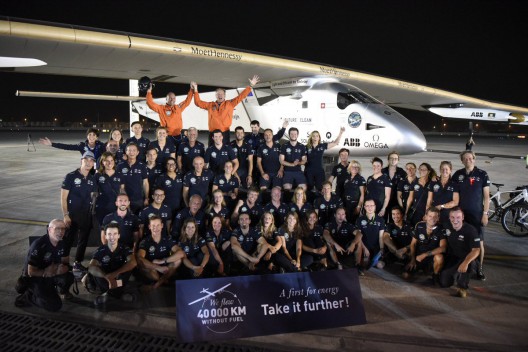 Only a small part of the people who showed up to greet Bertrand Piccard, Solar Impulse 2’s ground crew helps document historic flight

Landing at night in the glow of the Sheikh Zayed Grand Mosque Center, the largest mosque in the UAE, and greeted by fellow pilot Andre’ Borschberg, the project’s sponsor HSH Prince Albert of Monaco, and a large throng in western and Middle Eastern garb, the flight climaxed not only an aerial adventure, but an opportunity to share multiple cultures and teach thousands of children and youth about alternative energy and the way to a green future for all.

Whether the promises made at the United Nations and at COP21 in Paris last December will be honored will in large part determine how successful the flight really was.

The team’s blog reflects a bit on the importance of the journey, and the worldwide affect it has had.

” This flight represents the most incredible wrap-up of this adventure. With André Borschberg joining his engineers one last time at the Mission Control Center in Monaco for the first half of the flight and Bertrand Piccard piloting the revolutionary solar airplane to the finish line. Inflight discussions were rich with passion and depth. Bertrand exchanged ideas with the dedicated UN Secretary General Ban Ki-moon, the passionate Christiana Figueres (former Executive Secretary of UNFCCC), the adventurer David de Rothschild, the newly appointed Patricia Espinosa (current Executive Secretary of UNFCCC), the Swiss President Johann Schneider-Ammann, famous R&B artist Akon, and the charming actress Marion Cotillard sharing this achievement with them.”

We will reflect in future entries what this adventure truly means to the future, and how #FutureisClean might help a troubled world redeem its best qualities.