After a 13-hour flight from Varanasi, India, to Mandalay (VYMD) in the Republic of the Union of Myanmar, Bertrand Piccard and Andre’ Borschberg have now had more press conferences than landings, giving a clue as to the real mission of Solar Impulse 2. 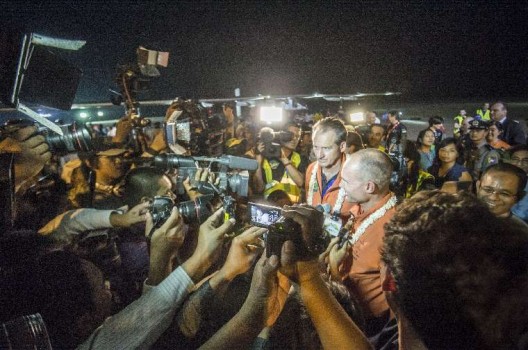 Flights thus far have been fairly uneventful, which is a plus in any pilot’s logbook.  The two pilots seem to be busier when they touch down, first finding themselves surrounded by media, then attending a series of events in which they talk about their visions for a better, cleaner future.  In Myanmar, that includes sharing the benefits of the high technology of Solar Impulse’s solar collectors with a country that lacks electricity in 70 percent of its population.   Myanmar shows up as a dark spot in night-time satellite views of southern Asia.

The Solar Impulse team works with Pact, a non-profit organization dedicated to improving the lot of the “poor and marginalized” by helping them “discover and build their own solutions and take ownership over their future.”

At one meeting, in which the pair endorsed Pact’s mission in Myanmar, the pilots and Pact’s Myanmar country director, Richard Harrison, presented solar power packages to women from Tada Oo Township, Mandalay Region.  This is part of a larger project with Solar Impulse’s partner ABB that will establish solar charging stations in remote villages in the Tada Oo township in central Myanmar.  ABB, a developer of control and power systems, also provides systems for regulating energy use on HB-SIB.

ABB notes, “Power from these stations will be sold to communities, bringing not merely electricity but economic self-sufficiency, entrepreneurship and equality – and safety.

“’I am excited,’ said U Thein Hla, a 70-year-old resident from Wun Pa Tae Village. ‘Now, we don’t need to worry about fire hazard associated with the use of candle light.’”  Many such locals earn less than $1.00 a day harvesting foods such as betel nuts.  Electrification could lead to expanded job opportunities, greater productivity from the ability to work and study at night, and since women are running the projects, both literal and figurative empowerment for their gender. 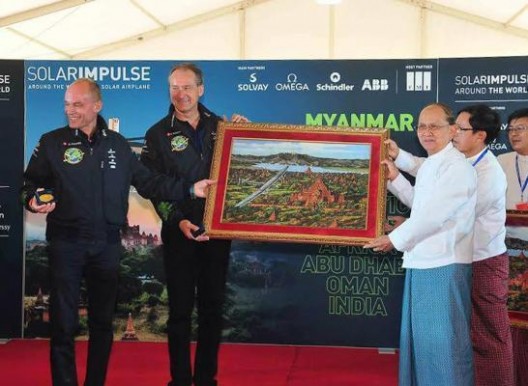 ABB reports that Bertrand Piccard was enthusiastic to be part of this.  “I am very touched and excited about this project.  It demonstrates that ABB and Pact make our vision a reality.”