With Andre’ Borschberg recuperating in Switzerland, Bertrand Piccard flew Solar Impulse 2 on the last leg of its China stay, making a 17 hour, 22 minute, 1,344 kilometer (725.7 nautical mile) flight between Chongquing and Nanjing.  The plane is being readied for its biggest leap so far, from Nanjing to Hawaii, a five-day mission that will test the endurance of the pilot and all systems of the giant ultralight aircraft. The Star, a Malaysian newspaper, reported what could be a growing concern.  “’Can we make the pilot sustainable as well?’ Andre Borschberg said by video link from Switzerland, where he is receiving treatment for health problems.”  He described his problems as “shingles,” with frequent migraines, both painful inflictions. 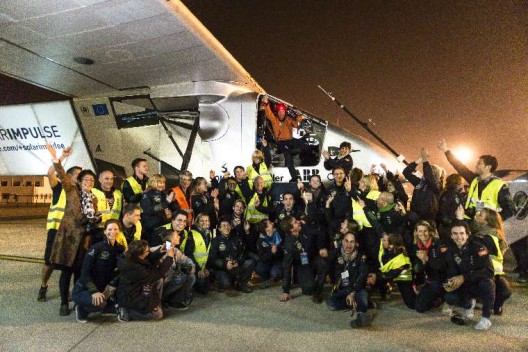 The Solar Impulse Team is always on hand, and always enthusiastic. SolarImpulse.com

“’This will be the human challenge when we tackle the next leg,’ he told an audience of reporters.”  Borschberg is scheduled to rejoin the airplane in Nanjing, where he and Piccard will plan the Pacific crossing.  This may be a greater issue than the meteorological or mechanical problems faced so far.  This leg of the round-the-world voyage was delayed for three weeks while the team waited for a favorable “weather window.” 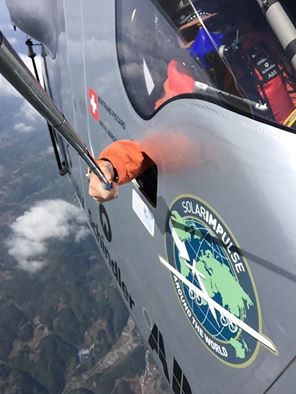 14,000 feet above the Chinese countryside, a perfect setting for an adventurous selfie. SolarImpulse.com

While on way to Nanjing, Piccard became to first user of a Chinese selfie stick to snap a few pictures of himself and SI2 14,000 feet above the earth.

Your editor discovered this revelatory video on Youtube, providing insights into the construction, operation, and problems of the four-meter (over 13 feet) propellers that pull HB-SIB through the air.  The fact that the team had to install a “teetering” mechanism in the propeller hubs resembles the solution Eric Raymond used on his propeller on Sunseeker I.  The device helps to reduce vibrations at different frequencies as the props vary their speeds.