The Solar Impulse web site reported at 17:35 UTC on “Bertrand Piccard has finally landed Si2 in Chongqing, China, under the applauses of the solar teams and solar impulse fans around the world. The landing has been difficult as the pilot had to manoeuver the aircraft in a rather windy spot after a 20h30 long flight. The team in Monaco is honored to receive the visit of Prince Albert of Monaco at the Mission Control Center. “ 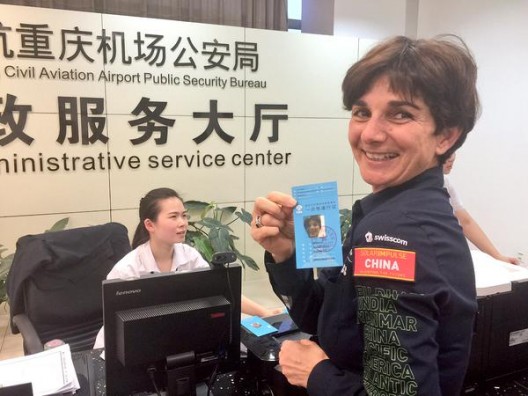 Bertrand Piccard’s wife, Michelle, happily displays her pass that allows her to be on hand for SI2’s landing at Chongqing. Logistics for this trip must be daunting

Piccard reached 26,500 feet on his traversal of the Himalayas, certainly a cold and hazardous flight in the dark.  Earlier, he enjoyed an earth-friendly serving of taboulé, quinoa & spelt over Myranmar at 24,000 feet.

According to MSN, “The flight has already set two records for solar-powered flight. The first was for the longest distance covered – the 1,468 kilometers from Muscat, Oman to Ahmedabad, India. The second was for the speed of 117 knots (216 kilometers per hour) reached during the leg to Mandalay from Varanasi, India.”  This leg set a record for the slowest speed, with Piccard battling headwinds that actually had SI2 flying backwards as it neared the airport at Chongquing.

It hardly seems that either pilot has time to sit down during their stays in the countries they visit.  In Chongquing, they reached out to 1,500 junior high students, and gave them a lesson in solar flight and the applications such technology might have in their polluted land.  To be fair, China is making intense efforts to close down coal-fired power plants and replace them with systems powered by solar and wind energy.

The kids, obviously intelligent, well-informed and energized could not have helped asking the questions which The Daily Mail, an English tabloid, had also presented to the two explorers.

Their lead sentence on the flight displays the curiosity most juveniles and adults possess, along with the audacity to ask questions which many would find embarrassing.  “Imagine spending five days cooped up in a cold box with barely enough room to stretch your arms as you forego shaving, showering and eating proper meals.

“That’s what two pilots flying around the world in the Solar Impulse plane are currently subjecting themselves to.

“But while the conditions sound grim, the pioneers are keen to stress that the flight is essential to prove to the world how useful solar power can be.”

The Mail explains that one can’t stand or move about easily, and that “A ‘visit’ to the toilet is pretty uncomfortable too – they simply use a hole in their seat.”  There.  Now we all know.

Piccard and Borshchberg do not shower, using wet tissues to clean themselves.  They don’t shave on board, since the weight of a razor is unwelcome.  “…They must eat things that are sustainable and rewarding for their bodies.  The daily intake for the pilots is 5.2 pounds (2.4 kilograms) of food, 84.5 ounces (2.5 liters) of water, and 33.8 ounces (one liter) of sports drink.”  Their personalized diets are designed by Nestle.

Changing clothes is a challenge, since pilots must keep their harness on at all times.  “’On the harness you have a life preserver, you have all your materials, in case you have to jump out in an emergency. Everything has to be on you at all times.’”  The Daily Mail reports, along with the news that the airplane moves like a “leaf in autumn” in windy conditions.  This requires the pilots to retain control at all times until they find a spot of calm air, put the airplane on its partial autopilot, and take a “catnap.” 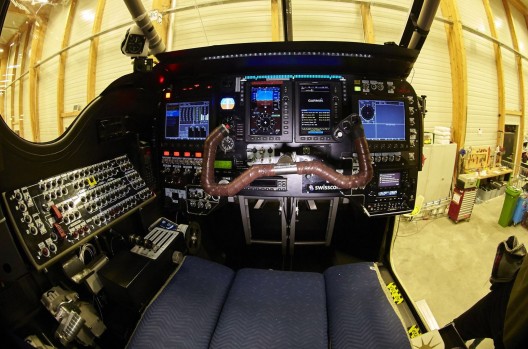 For a massive airplane, the cockpit of SI2 has little wiggle room

“’We plan to rest 20 minutes at a time, sitting sometimes, laying down other times – and only over the ocean of course,’” Borschberg told the Mail.  The pilots’ yoga training comes in handy here, beyond its ability to help them withstand long hours in the cramped cockpit.

“Flashing goggles” wake the pilots, along with a vibrating chair and auditory alarms.  With five-day ocean crossings and 20-minute naps, enforced alertness will be a necessity.

Winning over officials and students along their flight path, Piccard and Borschberg are elevating their mission to educate people of every major culture along their way.  They’ve even made it to hero status with a major tabloid newspaper and expanded their message to a broader population.  That is a major accomplishment in a media-saturated and often bored world.