Headlines all over the world are sharing the word of the day – penultimate, meaning the next to the last* – in this case the next to last flight for Solar Impulse 2.

The Guardian newspaper explained, “After setting off from Seville on Monday morning, the plane passed through Algerian, Tunisian, Italian and Greek airspace, and flew over the Giza Pyramids before touching down at Cairo airport at around 7.10am (5.10am GMT).

Its support crew cheered as the plane, no heavier than a car but with the wingspan of a Boeing 747, landed, and trailed after it on bicycles.” Which brings up a question – why are the guys on foot outrunning the guys on the expensive electric bicycles?

Certainly, the flight led to some spectacular photo opportunities. Passing over the Gemasolar plant shortly after takeoff from Seville, Andre’ Borschberg looked down on “The first commercial-scale plant in the world to apply central tower receiver and molten salt heat storage technology,” as described by its builder, Torresol Energy. 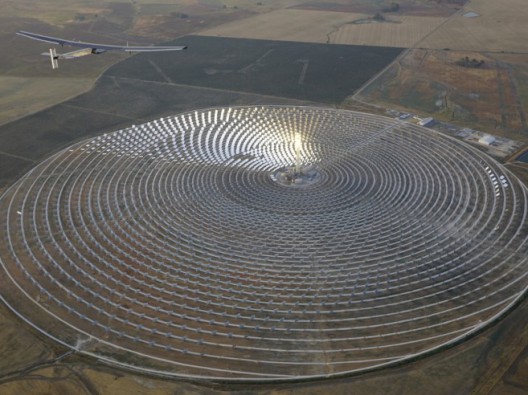 The Guardian compared the Solar Impulse to a Boeing 747, with figures suggesting how efficient the jetliner is as a people carrier. Each of the 524 passengers on the 747 requires only .294 of a ton (587 pounds) to carry him or her to a destination – about equivalent to an early Piper Cub or a modern Light Sport Aircraft. Solar Impulse 2 uses its entire 2.3 ton heft to take its pilot on a very slow sightseeing voyage. 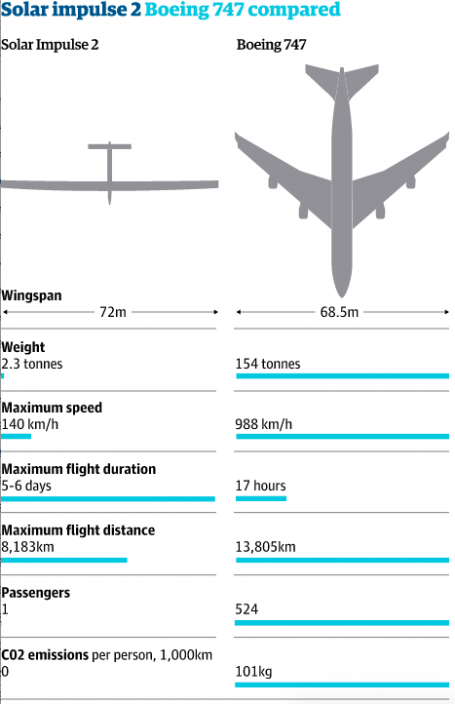 Solar Impulse 2 uses no CO2 in generating its power, while the 747, according to The Guardian, adds 101 kilograms (222.2 pounds) of the greenhouse gas to the airshed for every 1,000 kilometers (620 miles) traveled per passenger. Speed differences are noteworthy, though. 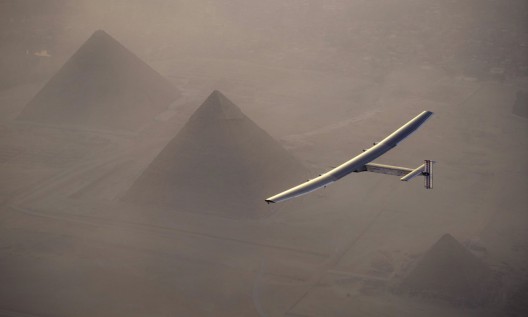 One writer compared Andre’ Borschberg’s flight over pyramids to Napoleon’s conquest of Egypt. Andre didn’t blow the nose off the Sphinx, though, as Napoleon’s gunners did

Its passage over the pyramids at Giza drew poetic utterances from around the world, and the landing in Cairo marked the end of Andre’ Borschberg’s last flight on this magic carpet.

*English lesson: (Your editor is an ex-teacher of English.) “Late 17th century: from Latin paenultimus, from paene ‘almost’ + ultimus ‘last,’ on the pattern of ultimate.”  Many people mistakenly think the word is a superlative form of ultimate, as in “the most ultimate.”