Saturday night, if you were lucky enough to be wandering the streets of New York City, you would have seen a string of lights slowly crossing the sky above the Statue of Liberty, a stirring sight – especially for those following the over-year-long flight of Solar Impulse 2.

Andre’ Borschberg had flown the giant electric airplane from the Lehigh Valley of Pennsylvania to the night skies over Manhattan, landing finally at John F. Kennedy International Airport.  The airplane will pause briefly before departing on a trans-Atlantic flight to an as-yet undisclosed location in Europe, from which it will make the final leg of the journey, returning to Abu Dhabi in the United Arab Emirates. 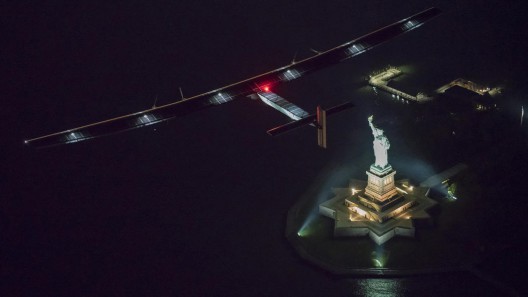 “The Statue of Liberty is a symbol of American values: the liberty to be a pioneer, the freedom to explore and invent. It welcomes travelers who arrive in this country, and flying over it was a tribute we paid for the special welcome we received at each destination.” André Borschberg

Andre’ and Bertrand Piccard, who have guided SI2 around the world, will meet with Ban Ki-moon, Secretary General of the United Nations.  This is a birthday treat for the Secretary-General, who will get to tour the airplane, something few will enjoy at this stop because of the extreme busyness of JFK.

During the UN’s meeting on COP21 last November, the international agreement on mitigating climate change, Bertrand addressed the gathering, and on April 22 this year, was connected live to the signing ceremony for that agreement while over the Pacific on his way to Mountain View, California.

Just as the Statue of Liberty is a symbol of the best of our nation, Solar Impulse 2 is a symbol of the best high technology has to offer.  The Solar Impulse blog explains the connection to the “real world.”  “…It’s a symbol which illustrates the power of clean technologies in all fields, not only in the aviation world. Every clean technology that has been used to build the plane can be applied to real life – from the efficient and lightweight materials it carries to the renewable energy source it uses. It can thus help politicians understand the direct benefits those technologies provide to tackle today’s challenges: climate change, economic growth… Something the UN is also trying to do.”