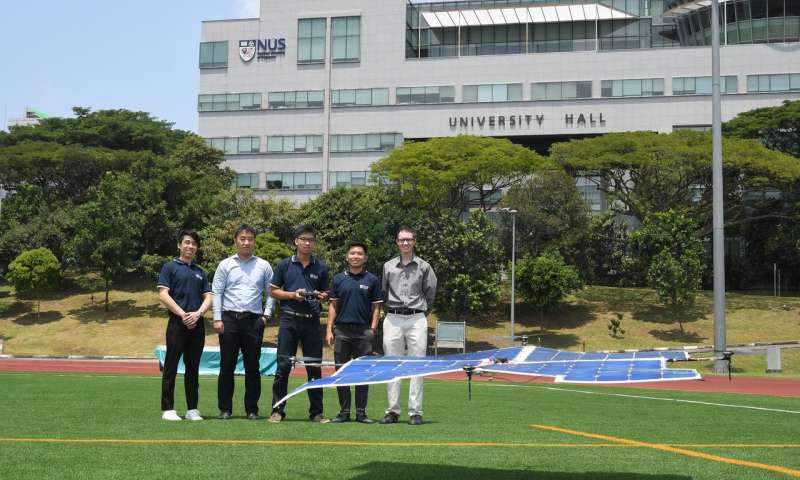 In their latest adventure in derring-do, a team from the National University of Singapore (NUS) Faculty of Engineering has developed and flown Asia’s first fully solar-powered quadcopter drone.  A large framework holds the solar cells, which are the sole means of powering the craft’s four motors.  Developers have flown the big square above 10 meters in test flights and achieved controllable flight without the use of batteries.

This is just the latest in a series of aeronautical exploits by NUS students.  In late 2015, they unveiled their Frogworks Snowstorm, a 24-rotor person carrier powered by 2.2 kilowatt (2.94 horsepower) motors driving 76-centimeter (30-inch) propellers. 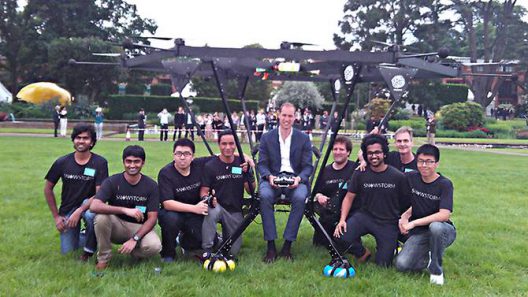 Prince William, a military helicopter pilot, spent a half hour with the Frogworks team

New Asia reported that, “At the London edition of technology event Founders Forum this month, [the Frogworks team] did not imagine that Prince William would end up showing interest in it.”  His Royal Highness “spent half an hour sitting in the machine, trying out the controls and talking to the team, according to a post on NUS’ website on Friday (June 17, 2016).”

Frogworks, by the way, is “a design and prototyping studio for green vehicles founded by and for NUS students in the Design-Centric Program (DCP) at the NUS Faculty of Engineering.”

Not willing to simply levitate indoors, an eight-member Frogworks team created the world’s lightest electrically-powered hang-glider trike.  Two eight-kilowatt (10.7 horsepower) motors drive pusher propellers.  Made of carbon fiber and aluminum, Delta weighs 49 kilograms (107.8 pounds empty.  It can manage a 75-kilogram (165-pound) pilot.  NUS claims it is “the lightest aircraft in the world that can take off and land with wheels while carrying an adult pilot.”

Their Latest – A Solar-Powered Quadrotor

Most solar-powered aircraft use a battery as a backup power source or to provide sufficient energy to get the vehicle aloft at all.  NUS managed to be the first in Asia A team from the National University of Singapore (NUS) has made their quadcopter drone fly on natural sunlight alone.

The big square had flown as high as 10 meters, topping a typical three-story building.  Using lightweight carbon fiber material, the team made a frame and a bed for the machine’s 148 individually-characterized silicon solar cells.  The whole thing weighs 2.6 kilograms (5.72 pounds) and has a surface area of about four square meters (a little over 43 square feet).  The 0.13 pounds per square foot is probably necessary to enable the for

NUS sees their accomplishment as a major aviation feat because “Rotary winged aircraft are significantly less efficient at generating lift compared to their fixed wing counterparts.”  Having to lift its own weight throughout 100 percent of its flight regime requires extremely light weight or significant power – or both.  NUS has been attempting pure solar flight for the last six years, with a 2012 design gaining only 45 percent of its required flight energy from solar cells and the rest from batteries.

Associate Professor Aaron Danner from the Department of Electrical and Computer Engineering at NUS Faculty of Engineering, who supervised the project, explained “Our aircraft is extremely lightweight for its size, and it can fly as long as there is sunlight, even for hours.”  He noted the drone’s ability to land on any flat surface and fly out of ground effect.  The drone can be controlled remotely, or programmed to fly autonomously using an on-board GPS system.

In a belt-and-suspenders expansion of the machine’s capabilities, “The aircraft can potentially be used as a ‘flying solar panel’ to provide emergency solar power to disaster areas, as well as for photography, small package delivery, surveillance and inspection. Batteries can be incorporated to power the aircraft when there is no sunlight or for charging to take place during flight to enable operation when it is cloudy or dark. Other hardware such as cameras can also be included for specific applications.”

Obviously, these added capabilities make the solar-powered machine just another quadrotor with solar assistance, but the accomplishment is still noteworthy.

One of the engineering students on the program, Yeo Jun Han said, “We encountered many engineering challenges when building the drone. These included finding an optimal number of solar cells efficient and light enough to power the propulsion system, which in turn has to be light and at the same time able to produce sufficient thrust to lift the aircraft. Other issues we faced included tuning and calibration of flight controls to enhance flight stability, as well as designing a frame that is lightweight yet sufficiently rigid. This has been an excellent learning opportunity for us.”

One supervisor from the IDP program, Brian Shohei, added, “To be able to make something fly under control for a long time is a very complex engineering problem. Our students have attained flight in its purest form, powered by natural sunlight. This is an amazing achievement.”

With commercialization in mind, the team continues to further improve its efficiency.  Opportunities for solar cell and other material development are truly only beginning.