Until now, all solar flight has been solo.  This is understandable, given the need for light weight and large wing areas.  But Eric Raymond is about to change this with Sunseeker III, the world’s first two-seat solar-powered airplane, shown at last weekend’s Green Aviation Show at Le Bourget Field near Paris, France.  Indoor displays were in the Musee’ de l’Air et de L’Espace (the Air and Space Museum). 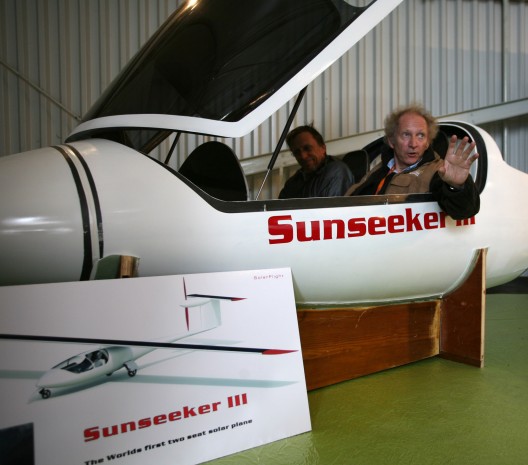 Gerard Feldzer, director of the Musee', enjoys the left seat. Note the illustration of the soon-to-be finished product.

Sunseeker III has a roomy side-by-side seating arrangement in a fuselage derived from the Stemme sailplane.  The wing is crafted from the molds (on long-term loan) for Stuttgart University’s 25-meter (80 feet) Icare II, flown in 1996.  As Raymond explains in his blog, “Professor Nitschmann’s design firm www.sfl-gmbh.de is very friendly to our project, and we hope to work together in the future on solar powered aircraft.”   The 20 kilowatt motor is being developed by Slovenian Roman Susnik, and fabrication of the wings is taking place in Slovenia, making the effort a virtual European Union assemblage.

In his blog, Raymond expressed the hope that the Stuttgart team would have Icare flying again by this summer, with a possible friendly competition between Sunseeker II and the German plane planned. 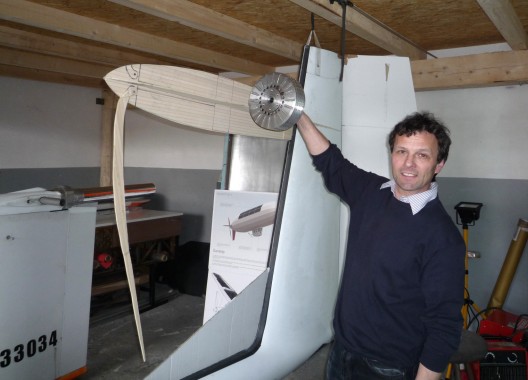 Roman Susnik displays his motor in the mockup's tail mounting

Outside, Raymond flew Sunseeker II four times during the weekend show and received the well-deserved attention of the French press.