Ultralights have done many spectacular things, including topping Mt. Everest and crossing the English Channel.  Gerard Thevenot flew the Channel under a La Mouette wing powered by an Eck/Geiger motor driven by three fuel cells in 2009 – six years before the recent flights with faster electric craft.  For that matter, Paul MacCready and his team flew a solar-powered aircraft from near Paris to an RAF runway on the eastern English coast in 1981.

Hang gliders, paramotors, and other rigid and non-rigid-wing craft might benefit from new sailcloth that incorporates flexible solar cells into its makeup.  Used on sailboats, the solar fabric helps run auxiliary motors and can help extend the cruising range of a boat when the sails are furled. 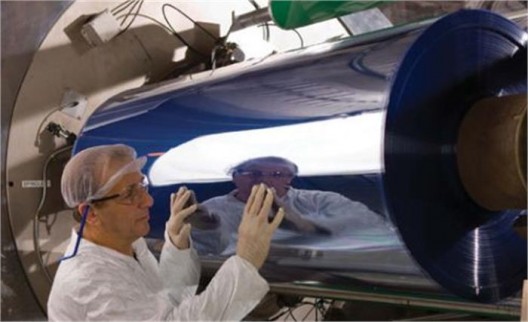 A French company named UK Sailmakers France has started a new company, SolarClothSystem®, to make mainsails with “a film containing high efficiency photovoltaic cells.”  The solar cells can be used on sails that will be rolled or folded, as happens a great deal on most sailboats.  SolarClothSystem cells are printed on a 65-micron (0.0026-inch) thick film in a roll-to-roll manufacturing process.

These flexible cells can be laminated into a new Titanium sail (made by UK Sailmakers in their French plant), or bonded to both sides of an existing sail.  Despite their flexibility, the cells will be installed only on mainsails do not get “thrashed” as Genoas (those sails on the front of racing sailboats that billow out in high winds), do when the boat changes directions (tacks). 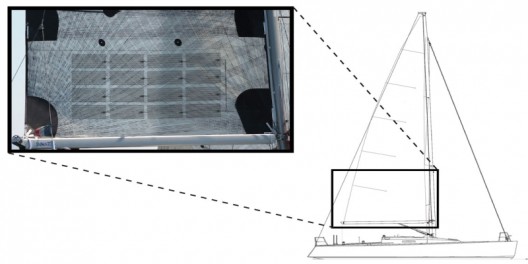 Placement of solar cells on sail – can be on both sides

The dye sensitized solar cells (DSSC) are composed of 26 cells, covering one by two meters, with an energy output of 200 Watts per square meter.  That output is classified as “in season,” which one might assume is sailing season.  An even greater output of 290 Watts per square meter comes from a Marseille reference, assuming a more southerly brightness.  The sail material can send a maximum of 19.2 Volts motor- or battery-ward, controlled by an “electronic regulator.”  This suggests a higher-than-average efficiency for DSSCs.

SolarCloth explains, “The electricity will be transferred to the boat’s batteries by wire and silver paste circuitry inside the laminate. In cases where the panels are bonded to the outside of a finished sail, the connecting wire will run under a Dacron tape.”  This seems appropriate for similar cloth on hang gliders, paramotors or even ultralight gliders such as a Sandlin Goat or BUG.

The cloth could even be place on the underside of a hang-glider’s wing or paramotor parachute, since the manufacturer claims the cloth works well in low-light and at less-than-optimum angles.
One yachtsman had seven square meters of solar sails installed on both sides of the top of his main sail.  Alain Janet, owner of UK Sailmakers France, claims that this array will generate an average of 1,000 watts (1kW). According to Janet, “Modern thin-film photovoltaic cells do not need direct sunlight to generate electricity. In fact, the panels on the sail opposite the sun will generate 30-40 percent of their maximum output with the indirect and reflected light.”

In the singlehanded Route du Rhum race in Nov. 2014, over 3,700 nautical miles from France to Guadeloupe, Daniel Ecalard used the PowerSails system on his Open 50 Defi Martinique, reefing the sails on 18 of the 25 days at sea. Despite being raised and lowered repeatedly and going through a 12-hour rain squall, “the whole system, solar films, electrical connections and wiring all performed flawlessly and kept pouring fresh power into the boat’s batteries.  When the boat reached Martinique, Ecalard unzipped the panels from the sail, zipped them onto the sides of his sail cover and continued charging his batteries while docked. 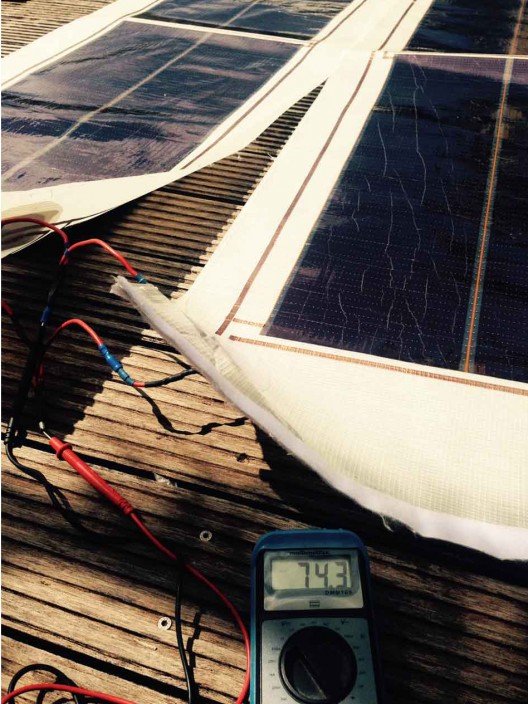 Because the solar cells are custom fitted, the sails are doubtless a bit expensive.  It will be interesting to see if prices come down over time, or it some enterprising Experimental Aircraft Association member becomes to the first to devise a means to fly an electric ultralight with this new form of range extension.