Solar Ship, located in Toronto, Canada, builds solar-powered triangular, blimp-like flying machines that could serve as lifelines to the world’s most remote places.  Solar Ships range from an 11-meter wide (it’s hard to call it a wingspan) envelope to a projected 100-meter (328 feet) wide monster that could carry up to 30,000 kilograms (66,000 pounds) for a minimum of 2,000 kilometers (1,240 miles).

The blog reported on Solar Ships three years ago, when their few flying examples were testbeds for the possible future development of practical load haulers.  Combining buoyancy with aerodynamic lift allows large payloads and great short-field performance, making their craft viable “bush” planes.  That the company can now build larger craft will demonstrate their concept to a wider audience.

With operations based in Ontario, Canada; Cape Town South Africa; Lusaka, Zambia; Kampala, Uganda; and Shenzen, China, Solar Ships is located near many already isolated spots which have the potential to become even more cut off.  The craft’s “lifting capacity of a truck and the performance of a bush plane” make it well suited to rescue and supply efforts by the humanitarian organizations that will use these unique machines.

Manaf: Serving up to 400 Million People

Manaf explains its mission this way: “Located in Nairobi, Bukavu and Bujumbura, Manaf uses bush planes to service the interior of Africa, an area with a population of 400 million people and rapid growth. Flying into remote areas in the DRC, South Sudan, Uganda, Rwanda, Burundi, and Tanzania, Manaf works with local entrepreneurs, UN agencies and NGOs to bring food and medical supplies to people who do not have regular access to cargo services.”

This week’s purchase of two Caracal and two Wolverine aircraft will give the Solarship/Manaf venture extremely short takeoff and landing (XSTOL) capabilities, allowing them to use areas as small as soccer fields.  These will “be used for cargo delivery and disaster relief in remote areas in East and Central Africa,” according to Manaf.  The joint venture, Peace and Freedom Services, will be able to haul small loads with the Caracals, while the two Wolverines can carry a 20-foot shipping container with a minimum payload of five tons.

Manaf CEO Fred Nimubona sees an existing need based on the harsh conditions in the regions served in conflict zones.  “The need for Peace & Freedom Services is immediate in our region. Many lives are being lost and our joint venture promises to improve the quality of life in regions that have, up until now, been inaccessible or diminished by war.” 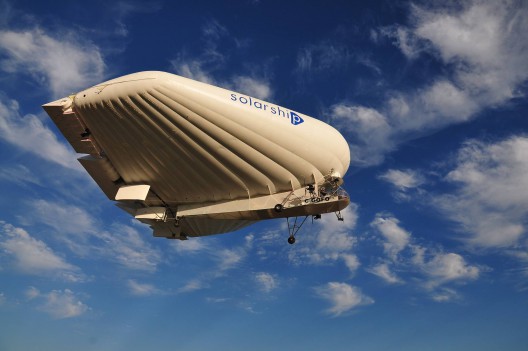 Solar Ship prototype in flight, showing the aerodynamic form of its pneumatic wing

Being able to drop that amount of cargo into a constrained space expands the scope of what relief services can accomplish.  Combining the airships with the two DC-3s purchased by Manaf gives a full range of capabilities and the ability to retrieve cargo from a reasonable distance for the older cargo aircraft, deliver it to a central airport, then disperse it to otherwise unserved points in East and Central Africa.  Bringing “critical cargo: food, clothing, medical supplies, and basic necessities” to hard-hit regions could aid thousands who might otherwise suffer privation and even death.

With solar-powered missions of mercy already part of Solar Ship’s future, perhaps a broader use might come from commercial hauling, with the potential to lower freight costs and speed deliveries, even at their leisurely cruise speeds.  As part of their outlook on “innovative disruption,” the company sees applications in service to environmental and scientific work.  Those willing to look beyond the ungainly appearance of these fat delta-winged hybrids might be well rewarded for their choice of an unusual approach.