A terse announcement from the SolarStratos project last week caused some dismay in your editor, but also gave hope that a brave project would go forward.

“Payerne, July 6, 2018 – the solar stratospheric SolarStratos aircraft damaged this morning during a resistance test on Earth, in the base of the team at Payerne. No risk:” 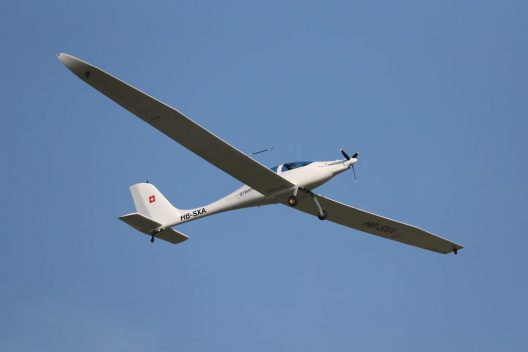 Solar Stratos in flight over Payerne, Switzerland on March 26

The bad news, “However, the wing was damaged and its repair will cause a delay in the team’s operational schedule,” was reminiscent of a failure of the Solar Impulse’s wing during static testing.  The break set that project back over a year but resulted in a wing that carried Solar Impulse 2 to Morocco and back, across the U. S., and finally, around the world.

Raphael Domjan, founder of the SolarStratos project, takes a philosophical view of the setback.  “Our plane is a unique prototype, destined to accomplish what nobody has done so far: fly to the stratosphere in a clean way, thanks to solar energy. This pioneering spirit involves a real technological challenge, and takes us to unknown territories. Risks are an integral part of such a project, even if our objective is to anticipate them as well as possible; this is why we carry out many tests.”

Designed by Calin Gologan, skilled at creating lightweight, high-performance structures, SolarStratos is a unique carbon fiber prototype. SolarStratos characterizes the airplane: “It is an experimental, fragile and sensitive aircraft. The test performed this morning consisted of gradually increasing the load on the wings, artificially, in order to simulate an extreme flight situation with two pilots on board the aircraft.” 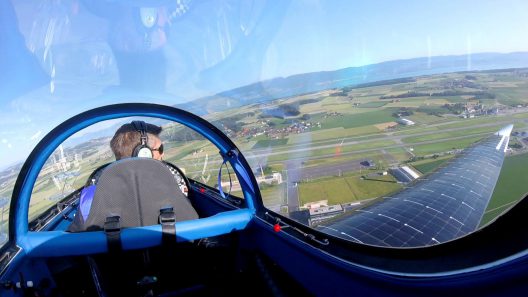 From behind pilot Hischier, passenger returning from stratospheric flight would have this view of Swiss landscape, solar cells on wings

Since it started flying one year ago, the SolarStratos aircraft has successfully flown 15 times with test pilot Damien Hischier at the controls.  Many lessons have been learned from this initial phase, which will be valuable for the next stages of the project.  Eventually, the craft would take passengers for flights into the stratosphere.

According to SolarStratos, regular test flights over La Broye gave Hischier “ample opportunity” to sort out the controls and “get a sense of the behavior of the solar airplane.  We provide SolarStratos’ Q and A with Hischier below.

Damian – what is your background and how did you become a test pilot?
Originally, I was an airline pilot, then I transitioned to a business jet pilot. After that I went to Africa to be a ‘bush pilot’. And now I’m a test pilot. I’ve tested around 140 different aircraft, including a number of prototypes. Piloting a new plane is always a significant challenge, but that is what I enjoy.

What do you think of the SolarStratos aircraft?
The project really fascinates me from an aeronautical point of view, but also because of the values that the project conveys. I am a supporter of sustainable development and new technologies and this project combines these two principals.

What are the particularities of this project from a pilot’s point of view?
Well, it is really experimental. It flies very slowly and has a large wingspan, so high inertia. It is also an excellent glider. At the start of the project we had a descent rate of one meter per 38 meters traveled, which was clearly insufficient. Imagine a descent from the stratosphere at that rate! We installed an airbrake that works very well, so now we can descend much faster. Dozens of other details have been modified and tested successfully.

What are the objectives of these test flights?
Every time we fly, we change the ’flight envelope’. That means we push the boundaries each time, that could include more complex maneuvers, longer flight time or higher altitude. The ultimate goal is to evolve the plane and make it safe so that Raphael can take over the controls.

And what are the next steps?
We must now define the minimum flight speed, determine the ideal climb angle and calculate the energy needed to climb. We know all the theoretical data, but it is crucial to validate the engineering calculations against practical tests.

How do you analyze the evolution of the project?
Last year, we flew three flights before the plane went into the yard for major modifications during the winter. Since the spring, the handling of the plane is much better and I’m very happy with the way the project is evolving. The SolarStratos team is very competent and we are moving in the right direction. My confidence increases after every flight and soon I will be in a position to train Raphael and hand over the controls.

By Air, but Also by Sea

Posted by PlanetSolar Foundation on Monday, May 28, 2018

Domjan has extensive experience with solar power, having founded and sailed the MS Turanor Planet Solar boat around the world in 2010 through 2012 and release it for further voyages to help promote cleaning plastic from our oceans.

We hope for future success for all of Raphael Domjan and Calin Gologan’s projects.