Raphael Domjan is an adventurer in every sense of the word.  He’s sailed around the world on solar power, and attempted to paddle his way across the Northwest Passage in a solar-powered kayak. And now, he’s revealed an airplane that could carry him to the stratosphere on solar power.

SolarStratos is a 24.9-meter (81.7 feet) span motorglider shown to the public for the first time yesterday in Payerne, Switzerland.  With stage smoke and rock-concert lighting glittering from the solar cells on its wings and tail, the Calin Gologan-designed craft materialized before the crowd of 400 (according to Calin) gathered in the specially-built hangar. 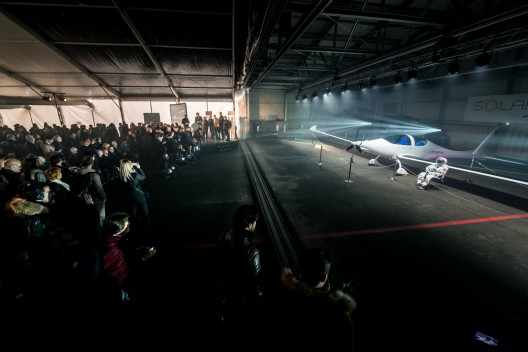 At a loaded weight of only 450 kilograms (990 pounds), SolarStratos should climb well on its dual motor, a mere 19 pounds itself.  A planned flight time of approximately five hours to take pilot and passenger to the planned 75,000 foot, near-space experience.  On only 42.8 horsepower swinging a 2.2-meter (7.2-feet), four-bladed propeller, this is, outside of the Perlan Project’s sailplane or high-altitude balloons, perhaps the lowest power of any record altitude attempt.

Where Perlan uses a pressurized cabin to protect its occupants and permit them to (we hope) breathe easily, SolarStratos has an unpressurized cabin, but with elbow room to allow movement even with occupants in bulky pressure suits.

Considerably less expensive than a ride on Spaceship 2, SolarStratos offers trips to the stratosphere for only 55,000 euros ($58,300 USD) as a Solar Voyager.  That includes all the privileges of the 11,000 euro ($11,660 USD) Solar Navigator package.  A Voyager gets a flight suit with his or her name on it, unlimited base visits, 25 SolarXplorer shares, rides in a three-axis simulator, a zero-G flight with Novespace, and a high-altitude flight in SolarStratos.  You can also get newsletters by simply filling out an application form.

The designer emails, “We just delivered the aircraft to SolarXplorers SA in Switzerland (just in time for the rollout)… The first flight will be in February next Year.”

The combination of high adventure and high technology has led to a beautiful aircraft with an ambitious flight plan.  We wish them the greatest of fortunes.