For transportation, two types of fuel cells come to mind: PEMs or SOFCs.  A third variety, DCFCs, may have a place in transport systems, and may have advantages in using “dirty” fuels.

PEM (Polymer Electrolyte Membrane – or Proton Exchange Membrane) cells use a solid polymer as an electrolyte and porous carbon electrodes containing a platinum or platinum alloy catalyst. They need only hydrogen, oxygen from the air, and water to operate. They are typically fueled with pure hydrogen supplied from storage tanks or reformers.

SOFCs (Solid Oxide Fuel Cells) use a hard, non-porous ceramic compound as the electrolyte. SOFCs are around 60% efficient at converting fuel to electricity. In applications designed to capture and utilize the system’s waste heat (co-generation), overall fuel use efficiencies could top 85%.  They operate at high temperatures (1,000° C or 1,830° F).

Both PEMs and SOFCs use hydrogen, which must be extremely pure and is therefore often produced at high costs.  What if a cheaper fuel were able to be consumed in fuel cells? 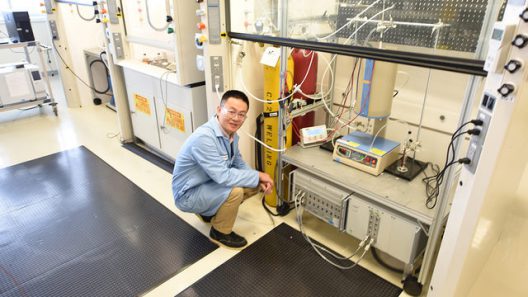 Researchers at the Idaho National Laboratory’s Energy Innovation Laboratory may have a plausible answer.  DCFCs (Direct Carbon Fuel Cells) can burn solid carbon, such as coal and biomass, and burn it in a way that makes carbon capture easier.  Apparently, we can choose between making hydrogen for fuel cells, using processes that are often not totally clean, or we can clean thing up post-consumption.

Researchers report that “Innovations in the anode, the electrolyte and the fuel allow the fuel cell to utilize more carbon, operate at lower temperatures and show higher maximum power densities than earlier direct carbon fuel cells….  Innovations in the anode, electrolyte and fuel… “Allow the cell to utilize about three times as much carbon as earlier…cells.”  Fuel can include coal, coke, tar, biomass and organic waste.

To make their design more efficient than earlier DCFCs, the research team designed a fuel cell capable of operating at lower temperatures – below 600° C (1,112° F).  Earlier cells ran at 700 to 900° C (1,292 to 1,652° F),  This requires such cells to be made of expensive materials that can handle the extreme temperatures.

The fuel cell injects finely-ground solid carbon via an airstream into the cell.  The fuel flows over a doped cerium oxide and carbonate electrolyte, both highly conductive materials.  The team’s anode is a 3-D ceramic textile that “interlaces bundles of fibers together like a piece of cloth. The fibers themselves are hollow and porous. All of these features combine to maximize the amount of surface area that’s available for a chemical reaction with the carbon fuel.”

Their fuel is a “fluidlike” composite of solid carbon and carbonate, which flows easily into the interface.  “The molten carbonate carries the solid carbon into the hollow fibers and the pinholes of the anode, increasing the power density of the fuel cell,” according to researchers.

It’s hard to distinguish the fuel cell as such: it looks like small paper-thin piece of green ceramic (like a watch battery according to the INL), about 10 centimeters per side.  Each layer can produce about 0.2 Watts per square centimeter at around one Volt, so a 10-centimeter square should be able to generate about 20 Watts.  Stacking the cells would of course increase output.

The results appear the Volume 30, Issue 4, January 25, 2018  edition of the journal Advanced Materials.   The article, “A High-Performing Direct Carbon Fuel Cell with a 3D Architectured Anode Operated Below 600 C,” is authored by Wei Wu, Yunya Zhang, Dong Ding, and Ting He.

According to BizMojoIdaho.com, industry has shown an interest in the research.  “Ding and his colleagues are partnering with Salt Lake City-based Storagenergy, Inc., to apply for a Department of Energy Small Business Innovation Research (SBIR)-Small Business Technology Transfer (STTR) Funding Opportunity. The results will be announced in February 2018. A Canadian energy-related company has also shown interest in these DCFC technologies.