Most liquid battery electrolytes that conduct ions between anode and cathode also carry with them a flammability problem, especially as chemists try to pack more power into smaller batteries.  Recent fires which have grounded all Boeing 787s in the world highlight the danger.

The blog has noted before the dangers of overcharging lithium batteries and especially of leaving even model airplane sized packs lying about unattended during charging. 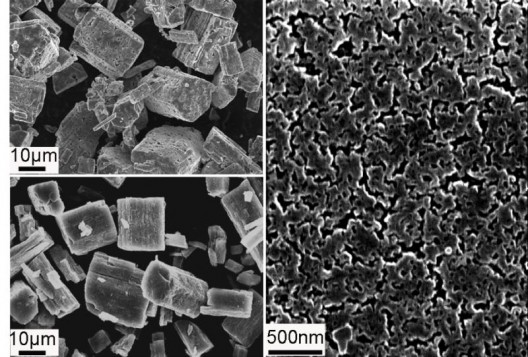 Oak Ridge National Laboratory researchers claim to have demonstrated safety advantages with a nanoporous electrolyte, according to a January 23, 2013 release.  ORNL’s Chengdu Liang says, “To make a safer, lightweight battery, we need the design at the beginning to have safety in mind.  We started with a conventional material that is highly stable in a battery system – in particular one that is compatible with a lithium metal anode.”

In line with objectives set by Secretary of Energy Steven Chu, using pure lithium metal as an anode could produce batteries with five to 10 times more power than current lithium units, which have carbon-based anodes.

Using a chemical process called nano structuring, the ORNL team manipulated lithium thiophosphate “so that it could conduct ions 1,000 times faster than its natural bulk form.”

Study co-author Adam Rondinone explains, “Think about it in terms of a big crystal of quartz vs. very fine beach sand.  You can have the same total volume of material, but it’s broken up into very small particles that are packed together. It’s made of the same atoms in roughly the same proportions, but at the nanoscale the structure is different. And now this solid material conducts lithium ions at a much greater rate than the original large crystal.”

Working at room temperature, the team developed an energy-efficient approach to its creation and believes the process can be scaled up to make larger amounts.  They would like to promote industry collaboration, as described on their ORNL Partnerships web site.

The research team continues testing of lab-scale battery cells, and awaits a patent.  Commercialization could lead to larger battery packs that would be ideal in land and aerial vehicles – part of the DOE’s five-year goals.