A handful of little white pellets holds enough hydrogen to fill a good-sized balloon.  At least, that’s the claim of executives at Cella Energy, a spinoff of Oxford University researchers.  The blog has covered their work twice, once with their claim that their hydrogen pellets could replace gasoline for the equivalent of $1.50 a gallon, and once for showing a method for pumping fresh pellets into a fuel tank after extracting the spent pellets. 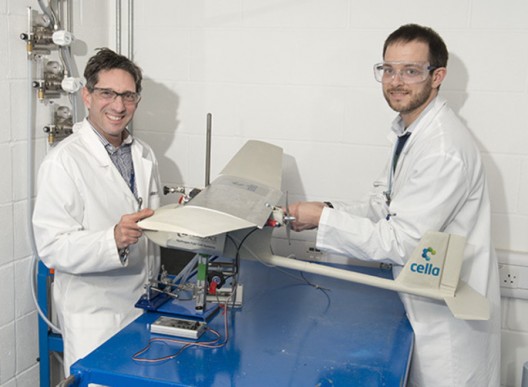 The partners have been flying the UAV since January, 2014 and are now showing it at different expos in America and Europe.  The power supply, according to the partners, is quiet, emission-free, lightweight, and can be shaped to fit any application.  In the current instance, the “tank” has a wing shape.  The pellets have a shelf life of years.

The prototype Cella Energy cartridge has no moving parts and creates low-pressure hydrogen on demand by application of “moderate” heat. Its ability to be made into any shape makes it possible to use parts of the aircraft that are not used for fuel storage in conventional UAVs, in this case the wing. Cella was continuing to develop its cartridge with the aim of flying it at air shows last summer.

“Although there is more work to be done, we are confident that we can make a power supply that can supply three times the range of existing battery technology, a performance that we believe will enable us to take a profitable fraction of this growing market.” says Cella CEO Stephen Bennington.

The Chief Operating Officer (COO) for L2 Aerospace says that although the market is “largely military” now, “it is set up to move into civilian sectors when Aviation Authorities open civil airspace to UAV operations. This is going to be a premium and early market for Cella and L2 Aerospace, with the first non-military customers in security, border patrol, emergency response, fisheries and agriculture.” 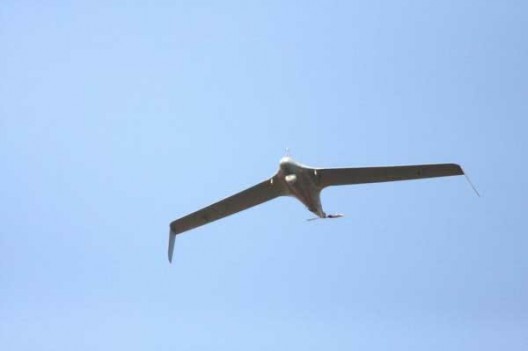 In its latest iteration, the pellet-powered fuel cell has been combined with the Bird-Eye , an Israeli-made “mini”-UAV weighing 11 kilograms (24 pounds) and capable of carrying a 2.8 kilogram (6.2 pound) payload.  In its last iteration two-stroke powered and able to take on three-hour missions, the BirdsEye now carries a Cella micro fuel cell and can fly for up to six hours.

In July 2014, Israel Aerospace Industries (IAI) revealed the latest model of Bird-Eye UAS models, the 650D. The 650D’s engine has been upgraded from electrical to internal combustion, giving it an endurance of 24 hours.

The aircraft can be launched from naval vessels using a catapult and recovered with a variety of systems, including a parachute.  The Bird-Eye 650D may carry a 2.8 kg stabilized payload with a cooled IR and TV camera from Controp called the T-Stamp. Bird-Eye can transmit sensor data via a Direct Line-of-Sight (LOS) data link

UPI reports, “Cella’s proprietary hydrogen technology provides a low-weight, high-performance alternative to lithium-polymer batteries typically used in small UAVs. The technology uses a plastic-like hydrogen storage material that can be pressed and shaped into any form.”

The company has also developed a hybrid-electric version that uses a small ICE and starter-alternator system that can operate on missions from 20-25 hours. Funding for the project is being provided by grants from Space Florida, the State of Florida’s aerospace and spaceport development authority, and MATIMOP, Israel’s Industrial Center for Research and Development. The amount of the grants has not been disclosed.