These two headlines top a report by Angela Wegrecki from the University of Michigan’s News Service, and despite their hopeful vibes, may even elicit yawns.  We see similar claims regularly, accompanied by promises of a five-year wait for the production models to begin rolling off the line.

Most batteries are developed by researchers working with small budgets and small facilities.  Thomas Edison had 40 assistants working with him to test the 1,600 different filaments tried before hitting on a carbonized sewing thread that gave the light he was seeking.  The University of Michigan has 2,700 square feet and probably numerous different researchers who want to use that space for different efforts.   In that space not much larger than an average American home, scientists are extracting promising results.

Speaking with the UM News Service, Dr. Greg Less, director of the lab, says that current research in the field is hampered by a lack of large-scale laboratory space. By providing such a space, researchers at the Battery Lab will be able to collect more in-depth and accurate data. And that, says Less, could lead to a breakthrough in battery power,

Lab director Dr. Greg Less, says, “We’re giving people the ability to make batteries better and faster than they would be able to do otherwise. That’s really the key. It would be really awesome if some company were to develop a next-generation battery, and we come to find out their initial work was done here at the Battery Lab. That would be a dream come true.”

Their research into solid-state electrolytes has resulted in a “roadmap to what could be the next generation of rechargeable batteries.”  Jeff Sakamoto, a U-M associate professor who leads the work, claims, “This could be a game-changer—a paradigm shift in how a battery operates.” 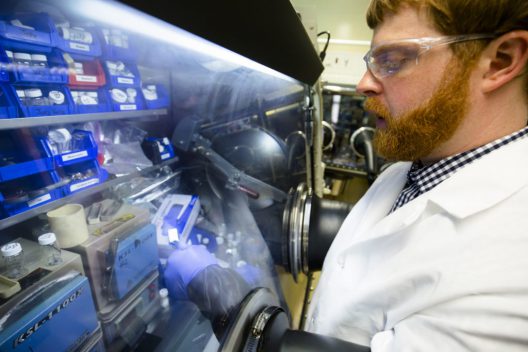 Sakamoto specializes in mechanical engineering of atomic-scale vacancies in advanced solid-state batteries and biomedical technologies.  He explains, “While the connection between these seemingly disparate fields may not be obvious, they do share one aspect; nothing, or, more specifically, studying the absence of mass in solids.

Since their introduction in 1980s, rechargeable lithium batteries with liquid electrolyte have powered everything from iPhones to Teslas.  They have a downside, though, sometimes bursting into flames when dendrites form inside, short the battery and ignite the electrolyte.

To keep dendrites from forming U-M engineers stabilized the lithium metal surface of the electrodes with a ceramic layer, which also prevents degradation of the metal over time.

Sakamoto explains, “What we’ve come up with is a different approach—physically stabilizing the lithium metal surface with a ceramic.  It’s not combustible. We make it at over 1,800 degrees Fahrenheit in air. And there’s no liquid, which is what typically fuels the battery fires you see.  You get rid of that fuel, you get rid of the combustion.”

A demonstration of a machine that uses heat to densify a ceramic known as LLZO at 1,225 degrees Celsius. Image credit: Evan Dougherty, Michigan Engineering

Early tests showed lithium metal growing through the ceramic electrolyte at low charging rates.  This caused short circuits, much like those in liquid cells.  Researchers chemically and mechanically gave a “pristine surface” that enabled even plating, suppressing dendrite formation and enabling “a dramatic improvement in charging rates,” according to Sakamoto.  “With this breakthrough, we demonstrated we can charge the battery in 3 hours or less.”

Nathan Taylor, a U-M post-doctoral fellow in mechanical engineering, observed no visible degradation.   “We did the same test for 22 days.  The battery was just the same at the start as it was at the end. We didn’t see any degradation. We aren’t aware of any other bulk solid state electrolyte performing this well for this long.”

The group’s findings are published in the August 31 issue of the Journal of Power Sources.

The research is funded by the Advanced Research Project Agency-Energy and the Department of Energy.