To share an idea of how packed with information and inspiration an Electric Aircraft Symposium can be, I’m still writing reports on the fourth annual event, even though EAS V is coming up April 29 in Santa Rosa, California.  This is the next-to-last blog entry on last year’s presentations, and as noted in yesterday’s press release for the event, 2011’s will have at least as many presenters and material.

Tyler MacCready is the son of Paul MacCready, founder of AeroVironment, Inc. and inspiration for many human-powered, ultralight, and solar-powered aircraft over the last several decades.  This author was in England when Bryan Allen pedaled Gossamer Albatross across the English Channel, a breakthrough in what was considered aerodynamically and structurally possible.  At age 14, Tyler had been the test pilot for the Albatross.  Such experiences led to his early work in solar-powered aircraft, as he told attendees at the fourth annual Electric Aircraft Symposium. 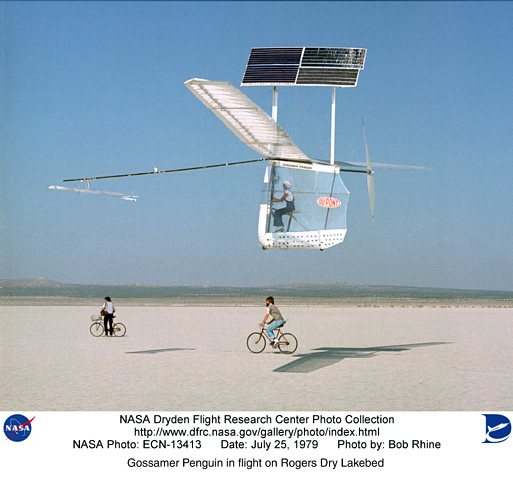 Solar Penguin for which Tyler MacCready was an early test pilot

Tyler was there as part of AeroVironment’s solar development, an exciting young life that many would envy.  Tyler’s brother Marshall and Janice Brown, a petite Bakersfield, California schoolteacher and commercial pilot, flew the first human-carrying solar-powered airplane, the Penguin, a reduced size and weight version of the Albatross.  Tyler explained that since the solar cells were only mounted on one side of the sail-like appendage above the wing, the craft had to be aligned perpendicular to the sun’s rays and could not make turns or even maneuver very much.  The Astro-flight 40 motor was similar to that used in the Boucher’s Sunrise II, the first successful, but remotely controlled solar-powered craft from 1974.

Initially powered by 28 nickel-cadmium batteries, solar flights were made with 3,920 cells that generated a maximum total of 541 watts.  Despite rough atmospheric conditions and low power, “on August 7, 1980, [Janice Brown] flew a public demonstration of the aircraft at Dryden in which it went roughly 1.95 miles in 14 minutes and 21 seconds,” according to the NASA Dryden Flight Research Center history.

The Penguin’s proof of concept led to the design and construction of the Solar Challenger, a 205-pound solar-cell bedecked craft.  The airfoil, a flat-topped Lissaman Hibbs 8025, enabled mounting the available rigid solar cells (over 16,000) and was reputed to have excellent stall characteristics. 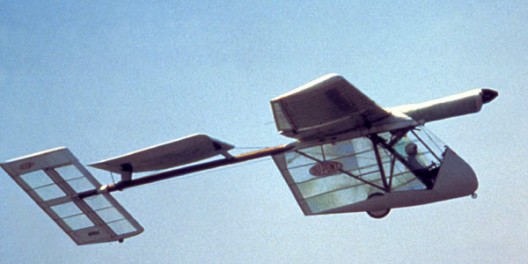 Weight included two Astro-flight motors in tandem and propeller speed reduction unit, and initial flights were again with Janice Brown at the controls, although her light weight barely tested the airplane’s 9G design limits. After making an eight-hour flight in May, 1981, Janice was replaced by heavier but more experienced Steve Ptacek, who went on to make a 163 mile flight between Corneille-en-Verin Airport near Paris, France and Manston Royal Air Force Base in England, reversing the path of the Albatross across the English Channel.  He achieved an altitude of 14,500 feet on the trip.  Considering the airplane had no battery backup, this truly was a solar-powered record.

Subsequent development went into a series of plank-like flying wings, expanding over time and growing more Astro-Flight motors, a program that ran from 1981 to 2003.  The Pathfinder, earliest and smallest, spanned 98 feet and had six 1.5 kilowatt (2 horsepower) motors.  It achieved an altitude of 21,802 meters (71,530 feet), the first of many such records.  Its 560 pound (252 kilogram) empty weight could lift a 100 pound (45 kg) payload. 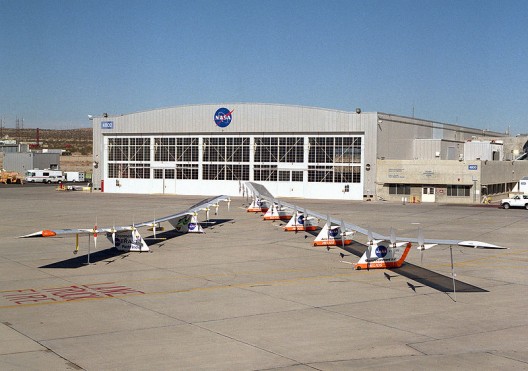 Helios, the largest and highest flying, was 247 feet (75.3 meters) across, weighed 2,048 pounds (929 kg.) and achieved an altitude of 96,863 feet (29,523 meters) powered by its huge spread of solar cells.  Tyler noted that there were plans to install regenerative fuel cells to provide “eternal” flight.

Tyler’s involvement with low-speed flight led not only to his participation in record flights, but in his youth to the creation of a form of model aviation the Scientific American Frontiers program shared at some length with its TV audience.  Even host Alan Alda seemed transfixed.