As aircraft become more electrified and integrated in their operations, even light airplanes are turning to networking system such as ARINC AFDX and CANBUS to link their different operational elements (See “An LSA With the Electric Heart of an Airliner, May 24, 2010).  The ability to sustain failure or damage in any one element without disrupting safe operation of other subsystems or the aircraft itself becomes a primary consideration. 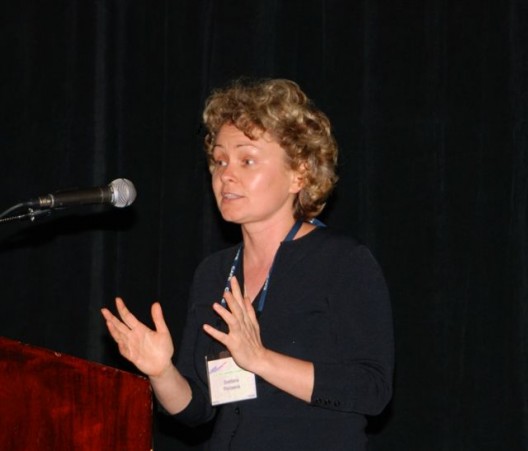 During the Electric Aircraft Symposium’s Friday evening dinner sessions, Dr. Svetlana Poroseva of Florida State University’s Center for Advanced Power Systems (CAPS) presented a four-minute rundown on her efforts to find a network topology that provides the necessary reliability and robustness to allow power systems or naval vessels in combat, for instance, to continue their missions with the least loss of capabilities. Her findings were that a web network, not unlike that of a spider web, allowed the greatest fault tolerance, least disruption of other services and enabled mission fulfillment. This is presented in her paper, authored with S. L. Woodruff & M. Y. Hussaini, “Topology of the generator bus in a warship integrated power system,” at the IEEE Electric Ship Technologies Symposium, held in 2005 in Philadelphi, Pennsylvania, and is on pages 141-148 of the Proceedings.  Her PowerPoint dinner presentation will be available in the papers from EAS IV on the CAFE web site.

Nature provides similar topologies in slime mold, of all things. According to “Are You Smarter Than Slime Mold?”, in the June 2010 Road and Track, Dennis Simantis reports that researchers in Japan and Britain studied “Physarium polycephalum, a large single-celled ameboid organism that’s known to forage for its food sources. In its foraging, this slime mold builds nutritional networks with a competence, fault tolerance and cost effectiveness comparable to those of human infrastructure design, in the researchers’ case, comparable to the Tokyo rail system.” When researchers constrained the mold to a plate that simulated Tokyo’s geography, “The slime mold’s response was a network that came even closer to the actual Tokyo rail system.”  Svetlana has noted “Tokyo and Paris power systems have features close to the web.”

In the meantime, Svetlana is moving, and notes, “I intend to continue this research and will surely participate in future CAFE workshops. It was very interesting and useful. I also hope to ‘convert’ some of my future colleagues at the University of New Mexico to the idea of ‘green’ aircraft and start fluid-dynamic projects related to this topic.” She will be available after June 21 to answer networking questions.