Spinach is the Rodney Dangerfield of the vegetable kingdom, and despite the best efforts of nutritionists, Popeye, and school lunch ladies to boost its respect levels, goes unwanted by many. But not by the team at Vanderbilt University who have combined it with silicon in a “biohybrid” solar cell. 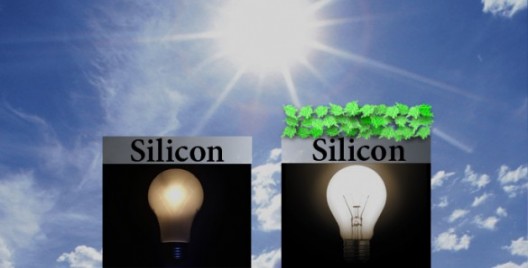 According to Vanderbilt’s David Cliffel, associate professor of chemistry, “This combination produces current levels almost 1,000 times higher than we were able to achieve by depositing the protein on various types of metals. It also produces a modest increase in voltage.” Cliffel collaborated on the project with Kane Jennings, professor of chemical and biomolecular engineering.

“If we can continue on our current trajectory of increasing voltage and current levels, we could reach the range of mature solar conversion technologies in three years.”

Over 40 years ago, scientists found that Photosystem 1 (PS1), a protein involved in photosynthesis, continued to produce photosynthetic energy even after it was removed from its host plant. PS1 is almost 100-percent efficient in generating energy from sunlight, compared to the 40 percent of the best man-made solar cells. The impetus to use low-cost plant proteins in generating electricity is obvious, but difficult.

PS1 so far has generated far lower levels of electricity than the higher-priced cells with platinum and iridium in their makeup.

Spinach-based PV cells didn’t last long initially. Researchers have since demonstrated that their green cells can provide power up to nine months without a deterioration in performance. As reported by Vanderbilt, “’Nature knows how to do this extremely well. In evergreen trees, for example, PS1 lasts for years,’ said Cliffel. ‘We just have to figure out how to do it ourselves.’”

Cliffel estimates that a two-foot panel of the latest PS1 solar cell could generate, “At least 100 milliamps at one volt – enough to power a number of different types of small electrical devices.” So far, best performance is 850 microamps at 0.3 Volts, two-and-one-half times than any previous biohybrid cell.

Researchers implanted an aqueous solution of PS1 from spinach onto the surface of a p-doped silicon wafer, evaporated the water in a vacuum chamber, and left a thin PS1 film, 100 molecules seems to be optimum, on the wafer substrate.

The Vanderbilt team continues to look for approaches to increasing the power output of bio-hybrid solar cells.   The research was reported online on Sep. 4 in the journal Advanced Materials and Vanderbilt has applied for a patent on the combination. 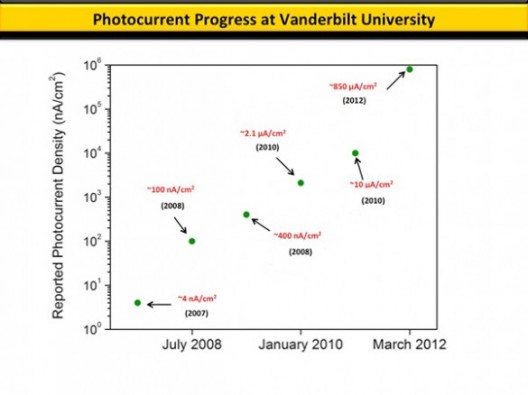 If a thin film of spinach juice on a wafer can generate electricity, perhaps a few wrinkles could make even more “juice.”

Princeton researchers are using biomimicry, copying nature’s ways, to put wrinkles and folds on solar cells that gather more light and give off more power than flat solar cells, as detailed in their report in Nature Photonics.  According to Wired UK, “The team claims that their design is capable of producing 47 percent more electricity than comparable solar cells without these topographical quirks. The wrinkles and deep folds, they say, ‘guide and retain light within the photo-active regions of photovoltaics”.

Engineers used “ultra-violet light to cure a layer of liquid photographic adhesive, alternating the speed of curing to create both shallower wrinkles and deeper folds in the material”.

Jong Bok Kim, the paper’s lead author said the results were far better than predicted: “I expected that it would increase the photocurrent because the folded surface is quite similar to the morphology of leaves, a natural system with high light harvesting efficiency. However, when I actually constructed solar cells on top of the folded surface, its effect was better than my expectations.”

Kim’s abstract gives a glimpse into the Princeton team’s findings. “Some of the simplest light-harvesting systems in nature rely on the presence of surface structures to increase internal light scattering. We have extended this concept to increase the efficiencies of man-made solar energy harvesting systems. Specifically, we exploit the wrinkles and deep folds that form on polymer surfaces when subjected to mechanical stress to guide and retain light within the photo-active regions of photovoltaics. Devices constructed on such surfaces show substantial improvements in light harvesting efficiencies, particularly in the near-infrared region where light absorption is otherwise minimal. We report a vast increase in the external quantum efficiency of polymer photovoltaics by more than 600% in the near-infrared, where the useful range of solar energy conversion is extended by more than 200 nm. This method of exploiting elastic instabilities of thin, layered materials is straightforward and represents an economical route to patterning photonic structures over large areas to improve the performance of optoelectronics.

This blog reported on Daniel Nocera’s artificial leaf last year, which he claimed to be 10 times more efficient than even real leaves. He had modest expectations for his invention then, thinking it could generate and store enough energy to power a reading light for doing homework by students in isolated villages. His assessment has grown, though, according to Wired UK: “With a single gallon of water, Nocera says that the chip (unstated size) could produce enough electricity to power a house in a developing country for an entire day.”  Nocera has an agreement with Tata, the Indian industrial complex, to develop this concept.

An American company, SMIT, has developed a product called Solar Ivy, emulating the patterns of ivy on building walls. Couple thinking like that of Nocera and this firm with the exciting developments from MIT, Princeton and Vanderbilt, and solar power could achieve new heights in efficiency and asthetics.  Who knows, even the spinach in their systems might get some respect.