A Stanford University team of researchers, including Nobel Prize winner and former U. S. Secretary of Energy Steven Chu and Yi Cui, long familiar to CAFE Blog readers, are using carbon nanospheres to coat lithium electrodes and help them resist expansion problems that formerly fractured them, and to keep elements in the battery’s reactive electrolytes from dissolving them. 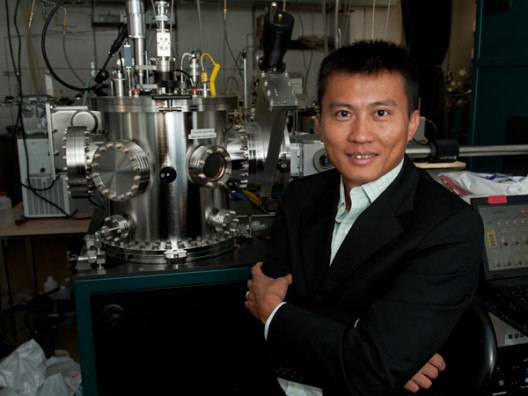 Dr. Yi Cui in his laboratory. He has spoken at several Electric Aircraft Symposia

This approach has enabled the team to craft a pure lithium anode, with all the promise of high energy density that such an electrode holds.   It’s also stable, a boon to longevity for these cells.

As reported in the news release By Andrew Myers for the Stanford Engineering School, “’Of all the materials that one might use in an anode, lithium has the greatest potential. Some call it the Holy Grail,’ said Cui, a professor of Material Science and Engineering and leader of the research team. ‘It is very lightweight and it has the highest energy density. You get more power per volume and weight, leading to lighter, smaller batteries with more power.’”

(The reference to the Holy Grail has led other reports to call the researchers “the knights of nanotechnology” and “the battery barons.”)

The release explains the historical antecedents and the importance of Stanford’s breakthrough.  “All batteries have three basic components: an electrolyte to provide electrons, an anode to discharge those electrons, and a cathode to receive them.

“Today, we say we have lithium batteries, but that is only partly true. What we have are lithium ion batteries. The lithium is in the electrolyte, but not in the anode. An anode of pure lithium would be a huge boost to battery efficiency.”

Guangyuan Zheng, a doctoral candidate in Cui’s lab and first author of the team’s paper in the journal Nature Nanotechnology, explained that the problem was significantly complex enough that many engineers have given up the search for a solution, failing to overcome three major problems in designing the pure lithium electrode. 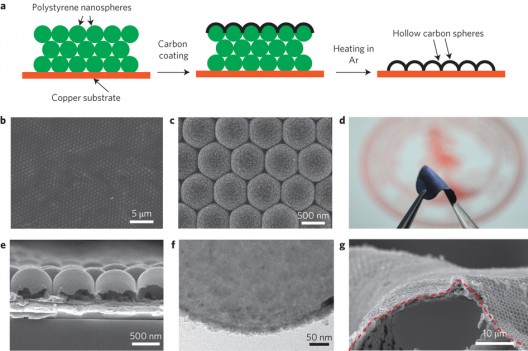 First, lithium ions expand during charging, gathering on the anode, normally made of graphite or silicon.  Because lithium’s expansion during charging is “virtually infinite” compared to the other materials, its swelling and contraction would cause cracks and pits to form. Such breaks in the anode would allow lithium ions to escape, and they would form “hair-like or mossy growths, called dendrites. Dendrites, in turn, short circuit the battery and shorten its life.”  This first challenge is mechanical.

The second challenge is chemical, lithium being highly reactive with the battery’s electrolyte.  It consumes the electrolyte and shortens its usable life.  The third challenge is one of safety.  Several high-profile aircraft and automotive fires have highlighted the concern.

The researchers attacked all three issues by building a protective layer of interconnected carbon domes (nanospheres) resembling a honeycomb on the lithium anode. This “flexible, uniform and non-reactive film… protects the unstable lithium from the drawbacks that have made it such a challenge. The carbon nanosphere wall is just 20 nanometers thick. It would take some 5,000 layers stacked one atop another to equal the width of single human hair.”

“’The ideal protective layer for a lithium metal anode needs to be chemically stable to protect against the chemical reactions with the electrolyte and mechanically strong to withstand the expansion of the lithium during charge,’ Cui said.”

Stanford’s nanosphere layer, composed of amorphous carbon, is chemically stable, and is strong and flexible enough to conform to the lithium as it expands and contracts during the battery’s normal charge-discharge cycle.  So far, the team has demonstrated 99 percent Coulombic efficiency (the ratio of battery output to current input on charging) after 150 cycles.  Unprotected lithium metal anodes have managed 96 percent, taking them out of contention for commercial viability.

Dr, Cui explains, “The difference between 99 percent and 96 percent, in battery terms, is huge. So, while we’re not quite to that 99.9 percent threshold, where we need to be, we’re close and this is a significant improvement over any previous design. With some additional engineering and new electrolytes, we believe we can realize a practical and stable lithium metal anode that could power the next generation of rechargeable batteries.”

For future applications in portable electronics, electric vehicles and grid storage, batteries with higher energy storage density than existing lithium ion batteries need to be developed. Recent efforts in this direction have focused on high-capacity electrode materials such as lithium metal, silicon and tin as anodes, and sulphur and oxygen as cathodes. Lithium metal would be the optimal choice as an anode material, because it has the highest specific capacity (3,860 mAh g–1) and the lowest anode potential of all. However, the lithium anode forms dendritic and mossy metal deposits, leading to serious safety concerns and low Coulombic efficiency during charge/discharge cycles. Although advanced characterization techniques have helped shed light on the lithium growth process, effective strategies to improve lithium metal anode cycling remain elusive. Here, we show that coating the lithium metal anode with a monolayer of interconnected amorphous hollow carbon nanospheres helps isolate the lithium metal depositions and facilitates the formation of a stable solid electrolyte interphase. We show that lithium dendrites do not form up to a practical current density of 1 mA cm–2. The Coulombic efficiency improves to ∼99% for more than 150 cycles. This is significantly better than the bare unmodified samples, which usually show rapid Coulombic efficiency decay in fewer than 100 cycles. Our results indicate that nanoscale interfacial engineering could be a promising strategy to tackle the intrinsic problems of lithium metal anodes.