Battery researchers, including those at Stanford University, have been focusing for years on improving lithium batteries of multiple chemistries.  While IBM tries to create the 500-mile battery based on lithium-air reactions, and ReVolt in Portland works on perfecting a long-lasting zinc-air cell, Stanford researcher Hongjie Dai and his team claim to have “developed an advanced zinc-air battery with higher catalytic activity and durability than similar batteries made with costly platinum and iridium catalysts.”

The resulting battery, detailed in the May 7 online edition of the journal Nature Communications, could be the forerunner of something with greater endurance and lower cost than current efforts.

Mark Schwartz, writing for Stanford, quotes Dai, a professor of chemistry at the University and lead author of the study: “There have been increasing demands for high-performance, inexpensive and safe batteries for portable electronics, electric vehicles and other energy storage applications.  Metal-air batteries offer a possible low-cost solution.” 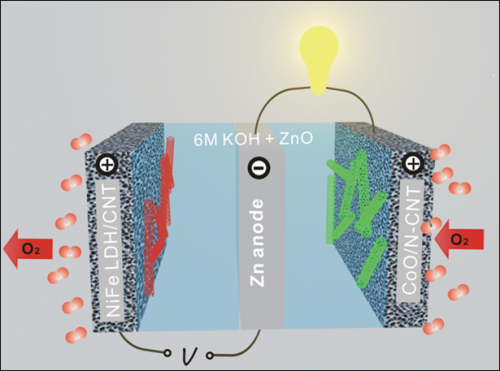 Metal-air batteries with aqueous electrolytes can be inherently safe, a major advantage considering the critical monitoring necessary for lithium cells.

Usually catalytic reactions during charge and discharge are “sluggish” on zinc-air batteries.  Dai’s group developed a number of Active and durable electrocatalysts on the air electrode are required to catalyze the oxygen-reduction reaction during discharge and the oxygen-evolution reaction during recharge. In zinc-air batteries, both catalytic reactions are sluggish, Dai said.

“’We found that similar catalysts greatly boosted the performance of zinc-air batteries,’ Dai said. ‘A combination of a cobalt-oxide hybrid air catalyst for oxygen reduction and a nickel-iron hydroxide hybrid air catalyst for oxygen evolution resulted in a record high-energy efficiency for a zinc-air battery, with a high specific energy density more than twice that of lithium-ion technology.’”

The battery shows good reversibility and stability over weeks’ long charge and discharge cycles. Despite the encouraging results, Dai notes “challenges” with the zinc electrode and the aqueous electrolytes.

The study was supported by Intel, a Stanford Global Climate and Energy Project exploratory program and a Stinehart/Reed Award from the Stanford Precourt Institute for Energy.

While the Stanford press release avoids sharing numerical data, the abstract for the Nature Communications paper gives a few hints as to how good the zinc-air battery might be.

Those wishing to see the full paper can lower their net worth $32 for the privilege.