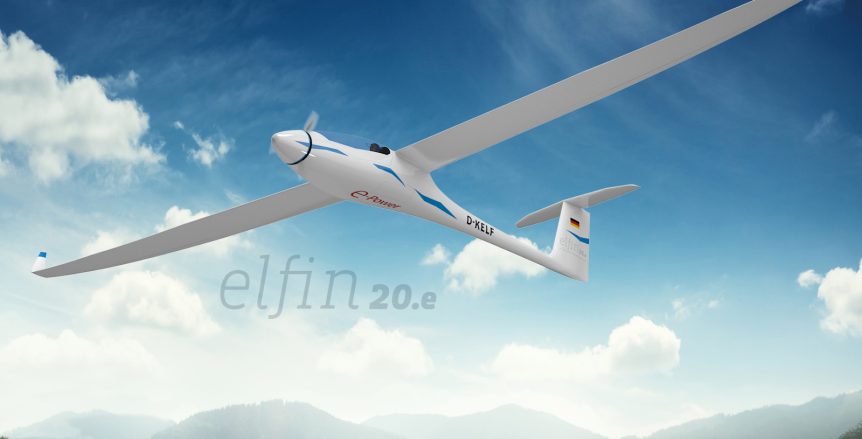 Reiner Stemme designed his namesake sailplane 30 years ago and the overall design and his new Elfin retains the original pop-out nose cone, folding propeller configuration.  The 50:1 glide ratio means this 20-meter (75-foot) span motorglider offers less than 40 pounds of drag at its maximum takeoff weight 0f 1984 pounds.  That is a significant benefit for the new electrically-powered version – which can fly further and save its batteries for retrieval and go-arounds.

In its latest iteration, the Stemme configuration is a totally new airframe being built by a totally new company, Reiner Stemme Aero GmbH.  As explained on the new firm’s web site, “The Elfin design is a complete new development and [is] not base[d] upon the existing S10.  REINERSTEMME.aero GmbH, the present company of Dr. Reiner Stemme, is not connected to STEMME AG.”

Earlier Stemme designs have accomplished much in the way of efficient, high-performance flight.  In 2014, Klauss Ohlman accomplished one trans-continental trip from Europe to Asia, followed by the surmounting of Mount Everest in an SV-10T.

That accomplishment is recounted even in the new company’s web site. “A highlight in its history was the successful mission “On Top of the World” in the Himalaya region using an underwing 3D camera system from DLR. We have the ambitious objective to continue this story in a new generation of planes; therein we rely on radical innovations. We cooperate with German research institutes and the industry – so we can best incorporate today’s knowledge in this project.”

The REINER STEMME elfin 20.e name represents the 20-meter (75-foot) wing and its electric (e) power system.  A further refinement, the “ex,” has a range extender that will allow flights up to six hours and 1,000 kilometers (540 miles) under power. 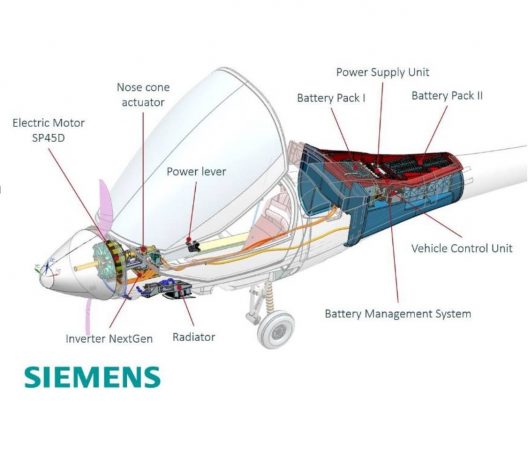 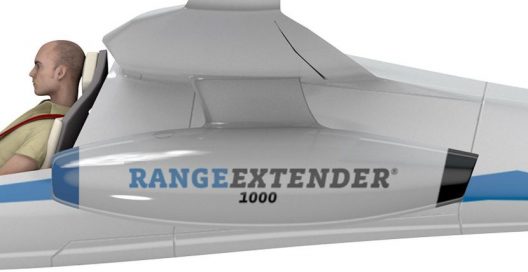 Elfin range extender allows up to 1,000 kilometer flights under power

For those wanting a longer mission profile, the Elfin can be fitted with an auxiliary range extender. The 60 kilogram (132 pound) under-wing mounted internal combustion engine and generator setup can deliver 30-35 kW continuously.  At a normal cruise of 185 km/hr (100 knots or 115 mph) at 10,000 feet, the Elfin can carry its two passengers 1,000 kilometers, or 540 nautical miles – roughly six hours endurance.  Fuel is carried in the center wing and the pod carrying the engine/generator can be mounted or demounted by a single person with a “rigging aid.”  In operation, a single on/off switch enables or disables the range extender. 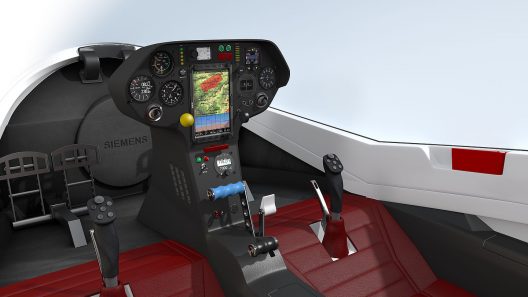 Pilot and passenger share a wide side-by-side cockpit in front of the wing.  A centrally-mounted instrument cluster and single-lever power control makes operation simple.  A directly-coupled Siemens motor in the fuselage nose turns the folding propeller which neatly tucks in behind a retractable nose cone.  (Current versions use a manual extension/retraction handle, but Stemme says the electric version has automatic operation.)  Your editor has been astounded at how easily the small-diameter prop pulls a large Stemme into the air.

Reiner Stemme has designed a “specific wing airfoil 20e-143 without premature lift plateau, seamlessly optimized over the entire wing span.”  Their long center section, fixed to the fuselage, avoids the problem of separate wings which plug in and have to be taped along their chord to avoid extra drag.  What the company describes as an “ambitious wing-to-fuselage-intersection design with fillets for drag reduction” is meant to overcome at least some of the drag from aerodynamic interference between joining components.  Outer wing sections pivot and allow the large craft to be stored in a conventional hangar.

If all were to go wrong (an unlikely event) the Elfin can be lowered safely be a whole-airplane ballistic parachute.  As an indication that authorities are betting that won’t happen, Elfin can be certified under EASA (European Aviation Safety Administration) or FAA equivalent rules.

We look forward to seeing this latest example of Reiner Stemme’s creativity in the air soon.