We reported on the reputedly first 3D-printed airplane, a laser-sintered plastic craft with a structure we compared to that of the WWII Wellington bomber, almost five years ago.  Since then, the aircraft has been dubbed SULSA (Southampton University Laser Sintered Airplane) and taken its place with the Royal Navy. 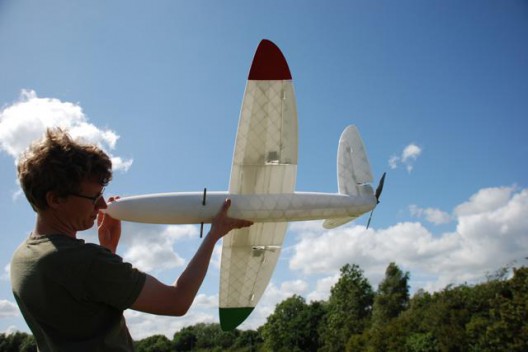 Jim Scanlan, lead academic on the project and professor of design within engineering and the environment at the University, explains, “Not all of our aircraft are 3D printed and the biggest one is around 60 per cent 3D printed.  At the moment we make this lovely sophisticated lightweight structure and then spend a week making all the wiring and soldering. It’s labor-intensive and error prone. Our vision is that we print all the wiring into the structure at the same time and that will be a huge step forward.”

He credits the designer of the Wellington for inspiring the small craft’s internal geodesics.  “Barnes Wallis developed a very efficient geodesic structure in the Wellington bomber but it was difficult to manufacture.”  He credits 3D printing with the ability to produce an elliptical wing similar to that of another WWII workhorse, the Spitfire fighter.  “Both those old ideas had been parked but can now be reborn as 3D printing has removed a constraint.”

Test hopped from the HMS Mersey last July and landing on a Dorset beach, the airplane’s 500-meter (from shore) flight was a precursor to more adventurous assignments.  Assigned to the icebreaker Protector, it’s since made flights of up to 30 minutes, and every icy splashdown in Antarctic waters is followed by more flying, something a piloted aircraft (and pilot) would probably not be up for. 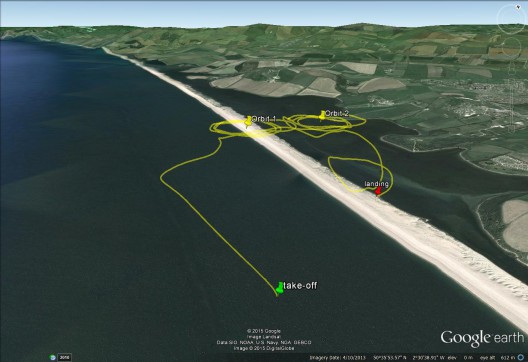 July flight of SULSA after launch from HMS Mersey

Andrew Lock, from the University’s Computational Engineering and Design research group, oversees the frigid operations and ensures the video coverage of seas and icebergs ahead help keep the host ship safe on her passage.  The plane works with a small quadrotor to give full coverage of what’s ahead, helpful in situations where ice extends past a crow’s nest observer’s view of the horizon.  The quad flies short-range missions, while SULSA takes provides more far-seeing observations.

Royal Navy ships have been launching ScanEagle UAVs from frigates in the Persian Gulf for some time, but this marks the first time the service has flown UAVs in the Antarctic.  “The craft launched from Protector are smaller and less hi-tech, but still provided the icebreaker with real-time high-quality information courtesy of a detailed picture of the surrounding environment from a perspective that is only available from the air,” according to the University.

Printed from nylon in four major parts and assembled without the use of any tools – it is claimed by the University to be the world’s first ‘printed’ airplane.  Controlled from a laptop on the ship, it cruises at nearly 60 mph and is almost noiseless thanks to its tiny engine.  At a cost of £7,000 ($9,940), SULSA costs less than an hour’s flying time by a Fleet Air Arm helicopter. 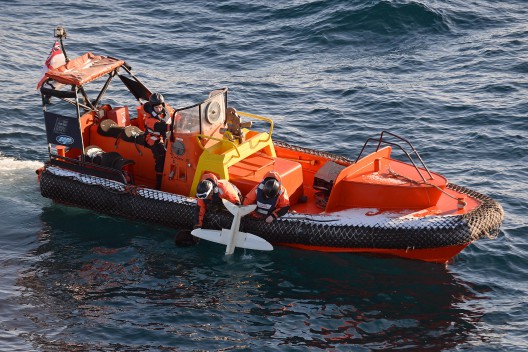 Captain Rory Bryan, Protector’s Commanding Officer, observes that there may be a future for such budget-conscious operations.  “This trial of these low-cost but highly versatile aircraft has been an important first step in establishing the utility of unmanned aerial vehicles in this region.  It’s demonstrated to me that this is a capability that I can use to great effect.”

Andy Keane, Professor of Computational Engineering at the University of Southampton, said: “The series of flights conducted by Southampton staff in conjunction with the Royal Navy from HMS Protector has been a great success. These flights have shown just what can be achieved with smart design and low cost digital manufacture.”

The Royal Navy and the University are both enthused by the outcomes of these early tests.  Commodore James Morley, the Navy’s Assistant Chief of Staff Maritime Capability, reports,

“Although this was a relatively short duration trial to measure the relative merits of fixed and rotary wing embarked systems, we are continuing to review our options for acquisition of maritime unmanned aerial vehicles in the future.”

The University of Southampton has pursued UAVs and advanced manufacturing for some time.  Their master’s degree program in unmanned aircraft systems is a potential trend setter.

The University gives a heads-up with their course overview.  “The future of exploration, transportation and conflict is in unmanned aircraft. Be the future and start a fascinating career on the precipice of national intelligence and technological advancements with a master’s in Unmanned Aircraft Systems Design. Sometimes referred to as drones, UAVs, UAS or RPAS, unmanned aircraft are revolutionizing our ability to monitor and understand our environment.

“This industry-led course focuses on the cutting-edge design of these sophisticated vehicles and is ideally suited to engineers looking to specialize or to enter into this fast-paced industry.”