The Duo was built by Eric and his wife Irena, and is Eric’s third solar-powered airplane.  His first, Sunseeker I, flew across the United States in 1990, making 21 hops from San Diego, California to Kitty Hawk, North Carolina.  Sunseeker II flew from Friedrichshafen, Germany across the Alps to Italy, then toured around Europe.

“Solar Flight’s mission is to lead the way for the future of sport aviation using the most advanced technologies in the world. Irena says, ‘We are working very hard to have the airplane tested and ready for passenger flights by this summer. No sight is more captivating than Earth from above. It will be even more beautiful from the cockpit of a solar powered airplane.’”

The press release notes that, “The engineering challenges to build solar powered airplanes are formidable.”  With a 22-meter wing and an empty weight of 280 kilograms (Editor’s note: 616 pounds – about 100 pounds lighter than the original J-3 Piper Cub), “the  structure must be incredibly light and aerodynamically efficient to perform well with only the power from integrated solar arrays. Because of the demanding requirements, solar powered airplanes have mostly been built as engineering novelties to break records or win prizes, rather than with the intent for practical use. The great triumph of the Sunseeker series is to integrate the huge number of conflicting design challenges into high performance, practical sport airplanes.”

With a 25 kilowatt (33.5 horsepower) motor, the Duo can “cruise directly on solar power with two people on board and is capable of durations in excess of 12 hours. It uses a battery pack located in the fuselage to store energy harvested from the solar cells which line its wings and tail surfaces.” 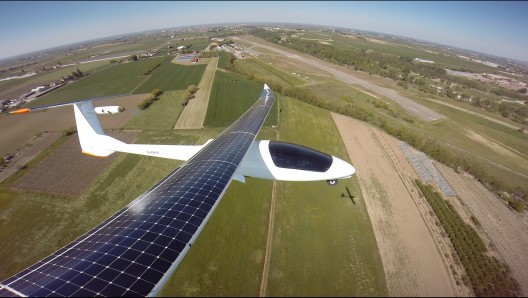 Sunseeker Duo over Voghera, Italy airfield, from which test flights are made

The low weight for a 72-foot wingspan airplane is astonishing, especially considering that it is essentially a sailplane, rugged enough to manage the thermals and turbulence of soaring flight.

Eric managed a structural weight without motor and battery for the original Sunseeker I of around 100 pounds – again a bit incredible for a 45-foot wingspan craft.  He’s learned from that and Sunseeker II, making improvements in aerodynamics and structure, but also benefiting from new materials and technologies.

Eric explains, “The lithium batteries today have seven times more capacity than the nickel cadmium batteries we used in Sunseeker I. When we first sketched the concept for this airplane, we couldn’t imagine solar cells with greater than 20-percent efficiency. These technologies are a dream come true.”   The latest Sunseeker has 1,510 solar cells with 23-percent efficiency, that extra three percent is a significant notch in performance – a 13-percent boost over the best previous cells. 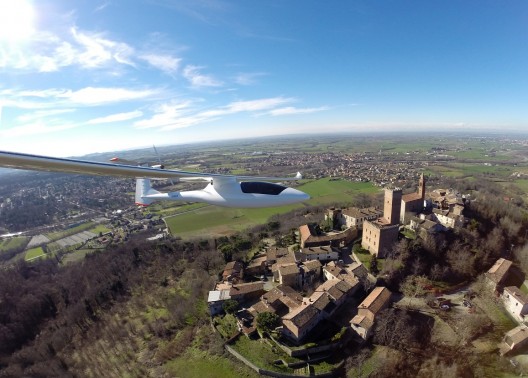 Aerodynamically, Eric observed “some instability in pitch, [so] more area and additional solar cells were added to the horizontal stabilizer. Now the airplane is docile with good control authority in the air and on the ground. The performance is better than the previous airplane in every category; operations are easier because the landing gear and systems are more conventional; and the airplane has enough excess power to carry a passenger and baggage.” 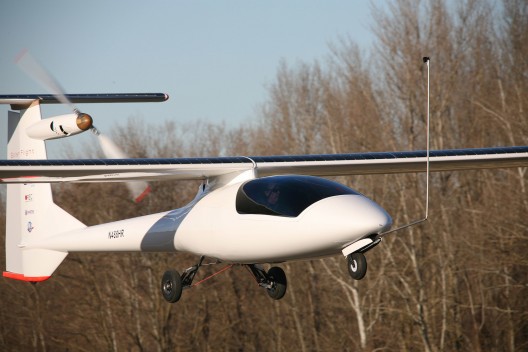 As one would guess, flight on sunlight like flight in a conventional lightplane. “Flying a solar powered airplane really can’t be compared to anything else, it’s totally unique,” according to Eric Lentz-Gauthier, one of the pilots of the original Sunseeker. “In sailplanes you are usually stuck under the clouds and in conventional airplanes you have terribly noisy cockpits. In both you have a sense of urgency about energy that detracts from the experience. In a solar powered airplane, you fly on top of the clouds. The horizon looks a little different when you’re flying with an unlimited supply of free energy. That’s what I’m most excited about with the new airplane – sharing this experience, it changes you.”

On this Earth Day, we can only hope for more such changing experiences for all of us.