Eric Darcy is NASA’s go-to guy for battery safety.  He is Battery Group Lead for Projects & Integration at NASA-Johnson Space Center in Houston, Texas, and consults frequently with the National Renewable Energy Laboratory in Colorado.

His talk at the First Sustainable Aviation Symposium was titled, “Passively Thermal Runaway Propagation Resistant Battery Module That Achieves > 190 WH/KG.”  The output may not sound like much, being at the middle-to-high end of lithium battery performance: but the promise of passive thermal runaway resistance is all-important.  Remember, too, that larger output numbers are usually for individual cells.  Putting cells into a battery pack with battery management system (BMS) components, wiring, etc. usually reduces overall performance per weight. 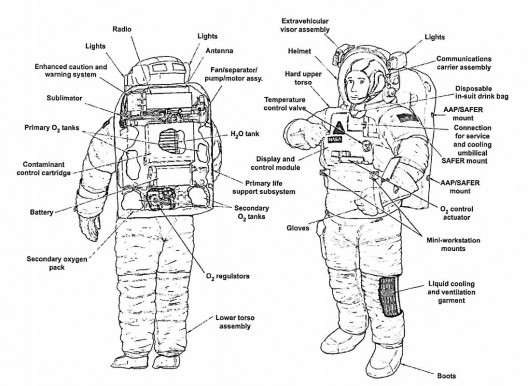 Note battery on lower part of middle “pack.” Think of the numerous functions it must fulfill (faultlessly) to keep the astronaut safe and happy

A few years ago, Dr. Darcy told his table at lunch during a symposium, that by matching batteries closely (to a fanatical degree, it seemed), overseeing their production under conditions exceeding six sigma quality control levels, and testing them intensely, he had built battery packs for space suits that did not require a battery management system.  Since here on earth that seemed like a stretch, considering the extreme importance attached to charging and discharging battery packs in a well-regulated manner, it made his accomplishment even more noteworthy.

From ensuring high-quality insides for individual cells, Dr. Darcy has turned his attention to protecting batteries from one another.  His abstract for his talk puts it a bit abstractly: “Highly thermally conductive interstitial materials between tightly nested, small Li-ion cells that also provide structural support to the cell can walls are critical for preventing adjacent cells from cascading into thermal runaway. Verification of these high performing designs has only been possible with specially made trigger cells implanted with a NREL/NASA invented internal short circuit device.” 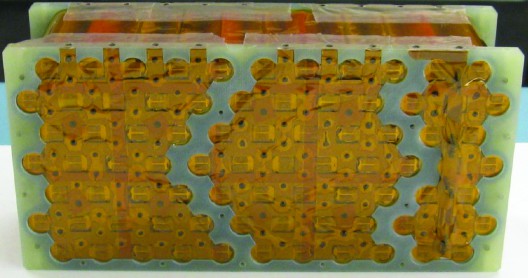 Extravehicular mobility unit (EMU) layout, designed to protect the rest of the system from an errant cell. Note ports for allowing “ejecta” to exit cell without harming others

His studies have included work to maintain structural integrity of battery containers even under extreme thermal runaways, including isolating individual cells that behave badly.  This involves strategic placement of vents to allow “ejecta” from disintegrating cells away from other, well-behaved cells.  Careful planning enables battery packs to remain small, but not self-destructive.

The idea of trigger cells allows controlled destruction to take place, while giving researchers a chance to find optimum configurations for their battery packs.  This is particularly important in spacesuits, where there are no minor problems.  Dr. Darcy discussed his work with Li-ion rechargeable EVA (extra-vehicular activity) battery assemblies (LREBA) and how one plots out an endless series of what-if scenarios to prevent serious difficulties in not only spacesuits, but on space vehicles.

A presentation he gave similar to the one he presented at the SAS can be found here.

His research has great relevance to those working on making commercial aviation a safe place for electrically-powered vehicles.