John Palmerlee, Editor of The Flying Wire, Experimental Aircraft Association Chapter 124’s newsletter, wote this in the May 5, 2010 edition.
The CAFE Team hosted what was in my opinion a very successful event at the Doubletree Hotel in Rohnert Park, April 23 and 24, 2010. Nearly thirty contributors from around the world spoke at the Electric Aircraft Symposium, and their message was clear: Change is coming… let’s get on board together.
Electric airplanes and motorcycles, model airplanes, algae biofuel synthesis, wetlands initiatives, hybrid air carriers, battery breakthroughs, VTOL PAVs, tethered wind generators, flight systems analysis, nanostructures… and a mystery Green Flight Challenge aircraft promising to tap into new design paradigms.
This was just a taste of the concepts spinning around at the EAS 2010.

This meeting of minds was diverse yet connected, calculated yet passionate. Every presentation filled a preset time-slot, so each presenter’s WPM (words per minute) metered their content. It was a dizzying earful! As the Friday presentations came to a close, I was struck by common threads woven into the many presentations, and presenters began congealing along these threads during breaks. This is when information flowed freely across competitive lines and voices were raised in passionate debate. 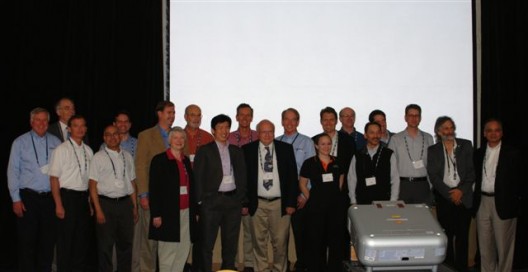 Just some of the presenters at EAS IV. Photo by CAFE VP Larry Ford.

I was fortunate to witness some of these dialogues… like after dinner Friday night, when Mark Moore’s and JoeBen Bevirt’s teams hashed out VTOL propeller blade design, weighing tilt vs flap as methods for minimizing vertical to horizontal transition vibrations.

Eva Hakansson of KillaCycle began her presentation by noting a substantial difference between motorcycle and aviation industries, but she finished the evening by sharing her realization that the battery requirements for the two were governed by the very same principles. By the end of EAS 2010, she was a firm believer in the value of synergy in the cooperative venture of electric powered transportation.

Many spoke of finding new solutions to long standing aviation problems, like when Zach Hoisington discussed Boeing’s look into electric power for airliners, discovering how the turbine-electric hybrid option generated unforeseen advantages to short and mid range flight profiles. John McGinnis with Synergy spoke about taking a new look at aerodynamic theory in his work toward designing his mysterious entry in the Green Flight Challenge. He attacked battery capacity limitations from a fundamentally new aerodynamic and systems perspective to gain needed weight and energy efficiency.
During breaks, I spoke with people I’d never met before… about motors, propellers, carbon fiber tubes, ultralight politics and even discussing ways to turn your life toward work you feel passionate about. I held a four pound, twelve kilowatt electric motor in my hand built by the Joby Energy team and marveled over and over at its lightweight innovative design. I talked with Jack Norris, legendary propeller engineer about the unusual strength and failure properties of a small carbon fiber “pull-truded” tube he brought to the conference. I learned about the amazing rebirth of model aviation resulting from the influx of lightweight electric motors and lithium polymer batteries.

I came away from this event dreaming and hoping for the future, and surprisingly, with a renewed connection to aviation’s place in my own life… and from the evidence, I was not alone. The potential generated by sharing this level of passion and information among industry leaders seems profound enough to impact the global future of aviation. I salute the CAFE Team for the bulls-eye vision and rock-solid determination required to make the Electric Aircraft Symposium 2010 such a resounding success.

Reprinted with permission of the author.

(Editor’s note:  It is wonderful to have John’s outlook, which distills a complex and challenging event.)