Kyoung-Shin Choi, a chemistry professor at the University of Wisconsin-Madison, and postdoctoral researcher Tae Woo Kim combined forces to come up with a two-pronged approach for producing stored energy from mere sunlight.

Many researchers take the familiar path of using expensive materials to extract the greatest percentage of energy from solar cells, but others use low-cost, less efficient organic materials spread across a greater area to get the same results.  Choi and Kim, though, decided that selecting two different low-cost materials could give greater results – something a more single-path approach would miss. 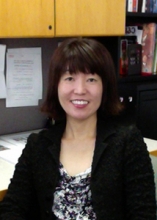 As their U of W report states, “Generating electricity is not the only way to turn sunlight into energy we can use on demand. The sun can also drive reactions to create chemical fuels, such as hydrogen, that can in turn power cars, trucks and trains.”

The expensive semiconductors and catalysts normally used to transform sunlight to fuels are “far too expensive” to make competitive sun fuel possible, according to the researchers.

Their solar cells use bismuth vanadate spread thin enough to allow a surface area of 32 square meters (344.5 square feet) for every gram of the material.  Think of the electroplating process as similar to that used to gold plate inexpensive jewelry.

That inexpensive coating needed a catalyst – and in this case – two catalysts to create a reaction that creates fuel.  Choi says other research stalled in trying to make the semiconductor-catalyst combination work together.

Choi and Kim “exploited a pair of cheap and somewhat flawed catalysts — iron oxide and nickel oxide — by stacking them on the bismuth vanadate to take advantage of their relative strengths.”

As explained by the University, the dual-layer catalyst design optimized reactions at the semiconductor-catalyst junction and catalyst-water junction.

“Combining this cheap catalyst duo with our nanoporous high surface area semiconductor electrode resulted in the construction of an inexpensive all oxide-based photoelectrode system with a record high efficiency,” Choi says.  Their efficiency of 1.7 percent is low compared to a record high of 12.4 percent for more expensive systems, but the cost-benefit ratio would clearly come down on their budget system’s side.

She hopes her and Kim’s novel and inexpensive approach “will provide labs around the world with fodder for leaps forward.”  Already improving on their basic design, the researchers think that other labs will be able to make rapid progress in improving efficiency.

Their research appeared in the February 14 issue of the journal Science.  The abstract for their paper is a bit above your editor’s pay grade to decipher.

Bismuth vanadate (BiVO4) has a band structure well-suited for potential use as a photoanode in solar water splitting, but it suffers from poor electron-hole separation. Here, we demonstrate that a nanoporous morphology (specific surface area of 31.8 m2/g) effectively suppresses bulk carrier recombination without additional doping, manifesting an electron-hole separation yield of 0.90 at 1.23 V vs. the reversible hydrogen electrode (RHE). We enhanced the propensity for surface-reaching holes to instigate water splitting chemistry by serially applying two different oxygen evolution catalyst (OEC) layers, FeOOH and NiOOH, which reduces interface recombination at the BiVO4/OEC junction while creating a more favorable Helmholtz layer potential drop at the OEC/electrolyte junction. The resulting BiVO4/FeOOH/NiOOH photoanode achieves a photocurrent density of 2.73 mA/cm2 at a potential as low as 0.6 V vs. RHE.