Almost four years ago, this blog reported on Dr. Yi Cui’s “painted battery,” a method of coating even paper with carbon nanotubes and silver nanowires, with the coated paper being able to store energy.

Adding origami to the concept, Arizona State University researchers have folded a paper-based lithium-ion battery and managed to demonstrate a 14-fold increase in areal energy, or energy density per unit of area.  This has serious implications for batteries that can be printed on roll paper and which have the requisite flexibility.  More rigid batteries might crack under the strain, for instance, and achieve negative results from being folded. 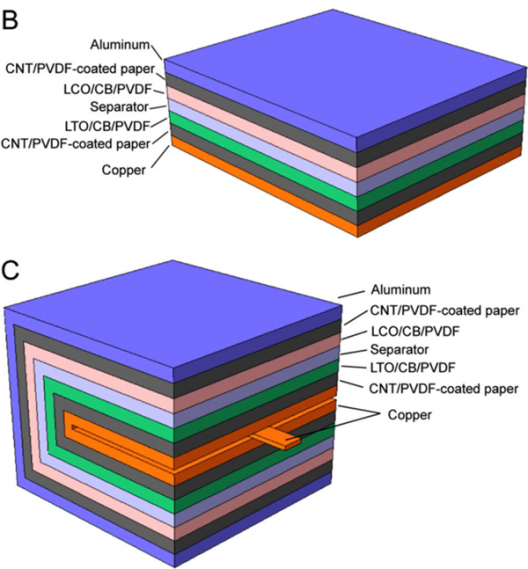 “’Foldable batteries may be useful for powering devices that have limited space on board,’ coauthor Candace Chan, Assistant Professor of Materials Science and Engineering at Arizona State University told Phys.org.  “’Furthermore, with the development of foldable paper-based electronics demonstrated by other research groups recently, a battery that also can be folded may become important for integration of the power source and other components into a single, entirely foldable device.’”

Researchers used lithium-ion batteries with carbon nanotube (CNT) ink for current collection, conventional lithium-based powders as electrodes, and thin, porous Kimwipes™ for the paper substrate. They added polyvinylidene difluoride (PVDF) for stickiness, to help keep the ink on the paper. 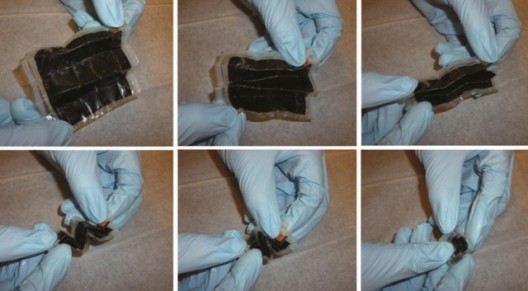 Researchers tried folding the paper battery in half, and then tried a far more difficult task, folding the paper to resemble a folded map.  This Miura origami folding pattern with one fold increased energy density and capacity 1.9 times.  Two folds gave a 4.7 times increase, and three folds showed a 10.6 increase in areal energy density compared to a planar battery. 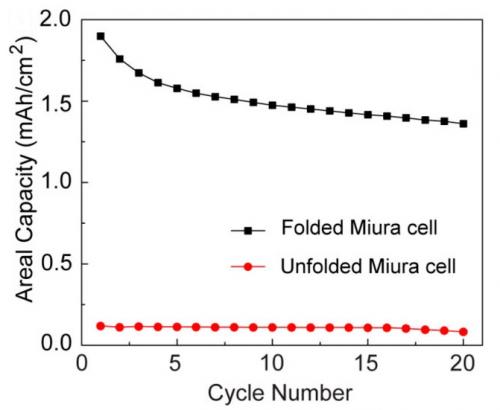 Folded battery had an initially stronger capacity, which dropped to a stable level for subsequent charge/discharge cycles

Folding the 6 centimeter by 7 centimeter stack of 25 layers reduces the pack to 1.68 square centimeters, and gives 14 times the areal energy density of the plain sheet.  Energy density increases are always less than the reduction in area because of losses caused by the folding, according to researchers.  Scanning electron microscopes showed some delamination along the folds.  Folded batteries seem to show slightly lower performance than that of unfolded batteries, with lower discharge capacity and specific capacity, especially with 16 vertices in the full Miura pattern.  To prevent short-circuiting on the batteries, the researchers used a flexible insulating thin-film, Parylene-C, between layers.

“We used ‘areal’ density to show that the energy density per foot print area is increased,” Chan explained. “This is different from the gravimetric energy density, since the amount of mass in the batteries does not change when it is folded and unfolded. So saying ‘areal’ density makes it clearer which density we are referring to.”

As reported in ExtremeTech.com, “The Miura fold, a rigid origami fold, was created by Japanese astrophysicist Koryo Miura for the space-saving deployment of spacecraft solar panels. Today, it’s most commonly found in fold-up maps, though even there it’s rarely used (probably because of the complexity of the fold). In short, the crease pattern of the Miura fold allows you to completely fold or unfold a piece of paper with just a single motion.”

Researchers are exploring geometric folding algorithms, computational tools and robot manipulation to allow more complex folding patterns, which might allow the batteries to be manufactured in a commercial scale.

Chan concludes, “There are endless possibilities for using folding and origami concepts to impart new shapes, geometric design, and new functionalities to paper-based energy storage devices not possible before.”

The areal density can be increased by more folds, and students from St. Mark’s School in Southborough, Massachusetts recently broke a world record by folding a large piece of toilet paper 13 times – well-beyond the typical bar bet limit of seven folds.  With a little “brute force” at the end, the students managed to outdo Jamie and Adam on Mythbusters.  Who knows where this will end?